The win against Royal Challengers Bangalore could propel Mumbai Indians to greater heights this season.

Mumbai Indians (MI )had a similar beginning to Indian Premier League (IPL) 2014, where they  lost five matches, before they finally managed to win a match. But after losing four in a row, MI finally registered their maiden win after a clinical performance against Royal Challengers Bangalore (RCB) in IPL 2015. Pramod Ananth feels this could propel MI to greater heights this season.

Mumbai Indians (MI) always have had talented players in their ranks and have been a force to reckon with. Yet, they managed to win their maiden IPL title in the year 2013 — in the sixth season of the tournament, and completed the double by winning the Champions League T20 (CLT20) as well. The team seems to have flourished under Rohit Sharma’s captaincy and with an excellent coaching staff backing them, there’s no reason MI cannot go all the way despite having a torrid start to the tournament. Read: Delhi Daredevils vs Mumbai Indians, IPL 2015 Match 21 Preview

The loss of Aaron Finch is no doubt a big blow for MI but they have an excellent replacement in Lendl Simmons, who scored a top notch 44-ball 59 in the match against RCB. The return of form of Unmukt Chand at the top is also a major boost for MI. Rohit, Kieron Pollard and Ambati Rayudu make up the reminder of the middle-order with Harbhajan Singh coming in after them. Read: Unmukt Chand all-praise for Mumbai Indians coach Ricky Ponting

Harbhajan’s form with bat and ball have been encouraging signs for MI this season so far. His excellent half-century against Kings XI Punjab (KXIP) and an economical spell of 3 for 27 against RCB, including the wicket of the dangerous Chris Gayle is a testament of his good form of late.

Just like they did in 2014, MI have to win a chunk of their games to break into the top four at the end of the season. It went down to the wire and their qualification was guaranteed only in the final group stage match against Rajasthan Royals (RR). Rohit has often been appreciated by many for his excellent captaincy and he will have to live up to it yet again as he tries to resurrect MI’s campaign. Read: Lasith Malinga’s struggle isn’t helping Mumbai Indians in IPL 2015: Sri Lankan “slinger” needs to lift his game for his side

They still have a strong bench strength, few of which is yet to be tested. Mitchell McClenaghan was given a game against RCB, but he failed to impress.  Abhimanyu Mithun had a good domestic season with Karnataka and will look to impress when called upon. Josh Hazlewood pulling out of the IPL is a big blow, but MI still have enough fire-power to win matches without him.

The experience of Ricky Ponting, Shane Bond and Sachin Tendulkar in the backroom is sure to come in handy as they look to guide MI to further glory. MI have Rohit as their leading run-scorer with 190 runs and Harbhajan has eight wickets to his name.  Despite of an ordinary start, they have a powerful team that can dig themselves out of trouble under any circumstance.

Their next three matches against Delhi Daredevils (DD), Sunrisers Hyderabad (SRH) and RR will be crucial in determining their fate this season. The win against RCB could just be the ideal push that the team needed to get their confidence back. 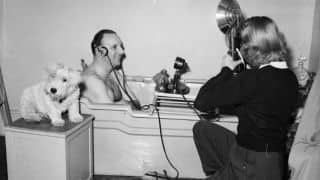 Pornography stops Test at The Oval