Yuvraj Singh and Kevin Pietersen were among the most notable exclusions by the franchises.

By Sandipan Banerjee and Varun Arora

A total of 53 players were released by the eight franchises of the Indian Premier League (IPL) on Monday. Some exclusions were obvious but some franchises almost surprised with their omissions. Varun Arora and Sandipan Banerjee go through the list of major exclusions and present a conversational review.

SB Banerjee (SB): Well, it is not very surprising for me.

SB: You have to understand IPL is not only about cricket. Its hardcore business too and at this moment Yuvraj does not have the ‘Brand value’ to be a profitable product for the franchise.

VA: This is harsh on him, especially after the India exit.

VA: But I do not think he will go unsold.

SB: I think the same. But he will surely not get 14 crores this time. Even RCB can buy him for less. That was probably the reason why he was released in the first place.

VA: He has a whole Ranji season ahead of him to modify his price tag. Remember, he started well against Haryana with a fifty and a hundred. However, Yuvraj needs to do a lot to get an IPL berth. But I back RCB. It was a sensible decision to release him. Who knows, it may get him to score more runs!

SB: So do you feel this will charge him up?

VA: Definitely. Those performances against Haryana came just after his omission from the World Cup squad. Once again, this may turn him on for a special Ranji season.

SB: I hope so. But let us turn to Delhi Daredevils (DD) now. Once again they have decided to change the core of the squad. Releasing players like Kevin Pietersen, Murali Vijay, Ross Taylor, Dinesh Karthik, and Jimmy Neesham at suggests so the same.

VA: They are trying to build a new team.  But going all out is not way, I think Neesham should have been there ahead of most. KP’s exclusion is not surprising after looking back at his performance last time around.

It will be interesting to see their strategy in the next auction where they will have a bucket full of cash and more than dozen players to pick.

SB: They should not waste money on non-performers the way they did last time; instead, the management should go for utility players. Most importantly, they need a good leader. A player like Mahela Jayawardene can be a good pick for them.

VA: Who do you think has led them best in the past years?

SB: No one actually. They only had captains, not leaders.

VA:  I guess they did the best when their local players performed for them. Remember, the best seasons Delhi had was when Gautam Gambhir, Virender Sehwag, Aashish Nehra, Rajat Bhatia, Shikhar Dhawan had played for them.

SB:  Yes, DD need to find way a way out to fix their mess. But what do you think about Sunrisers Hyderabad’s (SRH) strategy of dropping Aaron Finch?

VA: I do not think Finch has done particularly well for SH: 13 matches, 303 runs. Not surprised.

SB: But at this moment he is one of the best limited-overs players around.

VA: For me more surprising was Darren Sammy’s omission. He was good with both bat and ball.

SB:  Actually this year they are looking towards Moises Henriques as a replacement of Sammy. But I feel Sammy will get a buyer in the auction.

VA: Tell me what SH will miss the most about Sammy?

VA: His baby dance with baby pacifier tied around his neck.

SB: That is what I meant actually. For me the biggest surprise is Amit Mishra.

VA:  They have actually picked Karn Sharma over Mishra.

VA: In the Twenty20 format?

VA: Definitely, his batting is an added advantage.

SB: I would have played Mishra ahead of Sharma For the simple reason that Mishra is a wicket-taker.

VA: Do you remember Karn’s six in Mohali for SRH during Champions League last year?

SB: I do, still I think Mishra is better pick in any format.

VA: SRH needed seven from the last over; Karn slammed a four and ended with a huge six over deep square-leg. I would pick Karn for his tight bowling plus that good batting ability.

SB: Everyone has his own point of view. Let us not argue about this. But tell me something: are you surprised about Rajasthan Royal’s (RR) decision of releasing Unmukt Chand, who has recently done well in India A games?

SB: It is true that he had a poor domestic season last year. But I agree with his exclusion. With Karun Nair doing well, it would have been hard for Unmukt to find a place in RR. Probably a team like Mumbai Indians (MI), which has a vacancy for an opener, will be more suited for him.

SB: I think he should get more opportunities. The boy has talent, but needs some temperament. Is there any other release that has surprised you?

VA: I think he was a good option with bath and ball which every team needs at Nos. 6 or 7; and they hardly played Ankush Bains last season.

SB:  Sanju Samson is a better option than him.

VA:  They should have at least tried him.

SB: Dropping Samson would have been a gamble. Anyway, do you feel Zaheer Khan has an IPL career anymore?

VA: He needs to be fit to play.

SB: That is unlikely. Well, is there any other surprising release for you?

VA: I guess Kings XI Punjab (KXIP) has done well with releases. No surprises but all the genuine omissions.

VA: How many of the DD releases, in your opinion, will find buyers?

SB: Most of them. Jimmy Neesham, Ross Taylor, Laxmi Ratan Shukla, Murali Vijay, Wayne Parnell all are doing well of late. Even Dinesh Karthik should not go unsold.

VA: If they are doing well then why did DD axe them?

SB: They are probably looking forward to a fresh start. Do not be surprised if some these players are again acquired by DD.

VA: What happened to Mr Cricket?

SB: In IPL “value for money” is more important.

VA: True. I am looking forward to the auction. I will be looking to DD.

SB: Same here. It will be an interesting auction to watch out for. 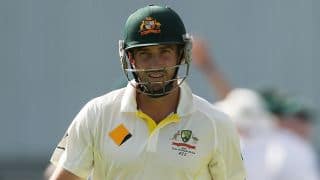 Two completed innings without a run scored off the bat!