IPL 2015 will be about young and fresh talent

IPL 2015 will be about young and fresh talent

The IPL will be an important platform for the youngsters to capture the attention of the selectors.

The cash-rich Indian Premier League (IPL) 2015 edition will kick off on April 8, with defending champions Kolkata Knight Riders (KKR) taking on former Champions League Twenty20 (CLT20) winners Mumbai Indians (MI) at the Eden Gardens. While the cricketing fraternity will be eagerly waiting to see the likes of Yuvraj Singh, Zaheer Khan, Virender Sehwag, Harbhajan Singh and Gautam Gambhir back in action, Sudatta Mukherjee writes why the eighth edition of IPL will be about young cricketers.

It is that time of the year, when cricketers from all over the world assemble in India to participate in the much hyped and cash-rich Twenty20 tournament of the year – the Indian Premier League (IPL). The Mumbai camp reached Kolkata on Sunday night, amidst thunderstorms and rain, posing as a major hindrance for the players. READ: KKR vs MI IPL 2015 Match 1 Preview

The front page of a leading daily in Kolkata had the pictures of Gautam Gambhir, skipper of KKR, and Trevor Bailey, the coach, looking up at the sky with gloomy faces. Surely the home team must be disappointed for not getting enough practice ahead of the big clash. While flying over Eden Gardens on Monday night, the wicket and the surrounding playing area were seen to be covered. The empty washed out stands was welcomed by deserted outer-field, which is usually taken up for net practice. Read: Bollywood to add glamour and glitter to make colourful opening ceremony

Although good news embraced KKR camp, with the return of spinner Sunil Narine, experienced cricketers such as Gambhir will be eager to be back in action after being shun away from the national side for poor performances over the last few years. For players like Gambhir, Zaheer, Yuvraj and Sehwag, the IPL will be the first step in getting back into the national squad, with the ICC World T20 2016 tournament being held in India. However, the upcoming IPL will be all about young and fresh talent.

In the past, we have seen many young players getting recognised and even getting a place in the national squad, based on their IPL performance. For example, Akshar Patel, who performed both with the bat and ball for Kings XI Punjab (KXIP) in the previous edition, was selected for the national side. Even though he did not play any matches in the ICC Cricket World Cup 2015, Akshar’s place in Team India, ahead of senior and experienced players like Yuvraj, leaves room for a lot of discussion.

Not only Indian players, but a lot of foreign cricketers have found success post their IPL experience. David Warner’s destruction with the willow for Delhi Daredevils (DD) was much recognised back in Australia and soon he found a place in the national side, becoming the first player in the country to play international cricket without playing First-Class cricket. Steven Smith had a wonderful time in India, making his IPL debut for the now defunct Pune Warriors India (PWI). IPL 2015: Schedule with venue details

Sanju Samson, Suryakumar Yadav, Rishi Dhawan, Shardul Thakur and even Abhimanyu Mithun, Robin Uthappa, etc. would be hoping for national call. Uthappa has been exceptional not only for KKR but also for Karnataka, having helped the side win back-to-back Ranji titles. Abhimanyu Mithun has been a premier bowler for Karnataka and also in the domestic circuit. Both the cricketers have played for India, but both have been out of contention for a long time now. Mithun is just 25-years-old and Uthappa has still a lot of cricket left in him.

Young Sanju Samson has been recognised in the past for his all-round talent. With Mahendra Singh Dhoni having retired from Test and also expressing his doubts over playing the ICC Cricket World Cup 2019, it would not be a surprised if Samson is picked and trained for big tournaments ahead. IPL 2015: Complete Coverage

Even KL Rahul, who has already made into the Test side, will be hoping to perform in the shortest format of the game. Shardul Thakur has been amazing with the red cherry in domestic cricket. His transformation has been noteworthy and he will be crucial in the success of his side Kings XI Punjab. Then there is Shivam Sharma and Sandeep Sharma also.

If not for the 50-over format and the longest format, the national selectors will surely have their eyes and ears open. With the ICC World T20 2016 almost less than a year away, a lot of youngsters can pull up their socks and perform at the highest level, if they want to be selected for the big tournament. IPL 2015: Points Table and Team Standings

There will be a lot of players to watch out for IPL 8. For KKR, KC Cariappa will be looking to impress the selectors, having been the most wanted cricketer post IPL 2015 auction. For Mumbai Indians, young 17-year-old Sarfaraz Khan, who has been making headlines for the past few years, will be aiming prove his worth among the big fish. READ: KC Cariappa: Who is Kolkata Knight Riders mystery spinner? 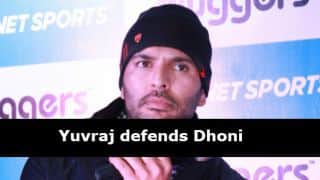