Several captains in this edition's IPL have performed for their teams when they were almost written off the match.

Shikhar Dhawan was the first one to bite the dust. Moises Henriques came and went. Yuvraj Singh followed. Naman Ojha and Deepak Hooda had a look in and threw their wickets at important stage of the match. One man stood still. He paced his innings beautifully with calculated risks and aggression. David Warner played the man of the hour for Sunrisers Hyderabad (SRH) and guided them to set up an IPL final date with Royal Challengers Bangalore in their own den. He crossed 700 runs in this season with as many as 8 fifties to his name. This has not been the first time a captain’s knock has been witnessed in this edition of IPL. We have had some good outings by the leader of the team. FULL CRICKET SCORECARD: Gujarat Lions vs Sunrisers Hyderabad, IPL 2016, Qualifier 2 at Delhi

Surprisingly, Rising Pune Supergiants (RPS) could not do much in this edition of IPL under an able leader, MS Dhoni. RPS had a forgettable debut season with all their important overseas players bowing out of the tournament due to injuries. Dhoni failed to inspire a second stringed side to turn the tables for the new franchise. He is not at fault as he still contributed with his vital cameos in almost every game. He finished with 284 runs in 14 games with a staggering average of 40.25. Their last game against Kings XI Punjab (KXIP) that was a dead rubber as both the teams were playing to avoid the humiliation of finishing last in the league stage. Needing 23 runs off 6 balls, Murali Vijay’s side must have been pleased with their effort until they were hit by Dhoni-storm as he slammed Akshar Patel’s balls out of the park with ease. A captain’s innings was noticed that night in Visakhapatnam.

Defending champions, Mumbai Indians (MI), crashed out of the tournament and finished fifth in the IPL standings. They had an inconsistent tournament from the beginning. Skipper, Rohit Sharma, was exceptional for them with the willow bailing them out in crunch run-chases, twice against Kolkata Knight Riders (KKR). He ended the IPL with 489 runs with an impressive average of 44.45, being fifth in the leading run-scorers list. 2012 and 2014 IPL champions, KKR, reached the playoffs but lost to SRH in the Eliminator. KKR skipper, Gautam Gambhir not only gave it all while leading them but also batted well, barring few outings, to end the season with 501 runs. His highest score came against SRH with a 90* to his credit.

On the flipside, Kings XI Punjab (KXIP) had a disastrous outing in this IPL but finish last in the league stage for two consecutive seasons. They started their campaign with a young David Miller taking charge of things for them but shifted to Murali Vijay when Miller could not perform well for them as a finisher. Vijay took control of things and led well not affecting his performance due to additional pressure of leading the side. He batted well to get a few fifties and ended up in the Top 10 leading run-scorers list. His knocks against Gujarat Lions (GL) and Delhi Daredevils (DD) stood out for his team.

DD gave Zaheer Khan a chance to lead their struggling side in IPL 2016. His shrewd and tactical captaincy was noticed and praised by all. He gave a chance to youngsters allowed them to express themselves freely on the field. He, along with Rahul Dravid and Paddy Upton, changed the way other teams looked at DD this season. They were taken more seriously this time around but just missed a chance to reach the knockouts.  Meanwhile being eliminated in Qualifiers 2, GL would still be proud of their maiden IPL campaign.

Suresh Raina did not have a great IPL campaign but in two must win matches against MI and KKR, he played with utmost responsibility and guided his team to wins. Raina has the ability to play lose shots when looking good but he played a calculative innings to take his side home in some do-or-die games. Lastly, with some much said and written on him, Royal Challengers Bangalore’s (RCB) skipper Virat Kohli, has been more than exceptional in this IPL. Scoring hundreds at will, he has already slammed a mammoth 919 runs in 15 innings, with four hundreds and six fifties to his name. His innings against KKR wherein he batted with stitches on his hand was phenomenal. He has left no team and took a special liking towards Suresh Raina’s GL scoring back-to-back centuries. ALSO READ: Virat Kohli and AB de Villiers: A club of mutual admiration

Warner’s blistering innings last night just adds to the number of ‘Captain’s innings’ we have seen in this IPL.  Being an Australian, he does not shy away from sledging but when Praveen Kumar was seen abusing him last night, he smiled and concentrated on the job in hand. That showed the willingness to win for him. Nonetheless, this IPL has shown the cricketing world the responsibility borne by leaders of different teams. Every time a team has been struggling to maintain with the required run-rate, a captain has led from the front. The zeal and temperament of all the captains should be noticed and applauded. With the IPL 2016 reaching its last match, we have two quality batsmen and leaders locking horns to lift their maiden IPL trophy. Let’s see if we are in store for one more mature and stand out performance by the two leading run scorers and captains of RCB and SRH. 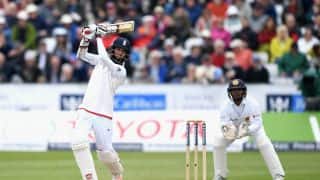