Royal Challengers Bangalore are making things hard for their opponents in the business end of IPL 2016 and will look to continue in the same way ahead of the Playoffs.

Royal Challengers Bangalore (RCB) are known as a team that always boasts of quality players but still have no Indian Premier League (IPL) trophy in their cabinet. The best performance came from them during the second as well as fourth edition of IPL, where they reached the finals but finished second. Opportunities have come their way but they, for some strange reasons, have not been able to make full use of them. This year’s IPL has been a roller coaster ride for Bangalore-based team. And, after few thumping victories against Gujarat Lions (GL), Kolkata Knight Riders (KKR) and Kings XI Punjab (KXIP), they look almost certain to qualify for the Playoffs. Their last match against Delhi Daredevils (DD) is more or less a must-win one. Even if they lose, they may qualify owing to their superior net run-rate. With this IPL wide open as ever, will this be RCB’s IPL? FULL CRICKET SCORECARD: Delhi Daredevils vs Royal Challengers, IPL 2016 Match 56 at Raipur

Virat Kohli’s side started their IPL campaign with a win over Sunrisers Hyderabad (SRH) by 45 runs. As always, they started the tournament nicely but lost plot mid-way. Interestingly, this IPL has been different for them. In the business end of the tournament, RCB have come out all guns blazing and restored the faith of their fans. They did lose a few matches they should have won, for instance, against KKR and GL; but, surprisingly, they pulled out few big wins against heavyweights such as Pune Supergiants (RSP), GL, KKR and KXIP. Analysing the resurgence of RCB, their top-order is coming good slowly but steadily.

Kohli has made batting look easy this summer and is way above all his contemporaries. He is on the verge of taking his troops in the IPL Playoffs single-handedly, quite the same way he took Team India into the semi-final of the ICC World T20 2016. Scoring 852 runs in 13 matches with four hundreds is no small feat and he still looks hungry for more. Talking about his captain, Yuzvendra Chahal, recently told the Asian Age, “He takes his training very seriously. He spends long hours at the gym as well as at the nets. He practices at the center wicket as well practice hitting sixes. After hitting four hundreds, he is still hungry for more and works very hard.” The consistency shown by Kohli has been infectious for his team’s change of fortunes.

The team management have shown faith in Chris Gayle, who has shown a glimpses of his usual destruction in their last match against KXIP. AB de Villiers is the man who controls their middle-order and keeps chipping in when needed. KL Rahul has impressed one and all with his run-scoring has solved RCB’s perennial problems. With Shane Watson too in their reputed arsenal, this is undoubtedly the most settled batting line-up.

Their bowling woes have continued for a long time. Given this, they have lost matches they should have won in the past. This year, however, their bowling has provided some impetus. With the inclusion of Chris Jordan along with Shane Watson, the duo have a potent death bowling attack. Even former Indian captain, Sourav Ganguly, has been impressed with RCB’s bowling and according to the Times of India (Mumbai) stated, “The inclusion of Chris Jordon has really helped them in creating the right balance; and as a result, they are faring better in the business end of the tournament now.” Chahal has also been among wickets and enjoys the trust of his skipper. Moreover, Sreenath Aravind has been going great guns and is among wickets.

The energy and aggression of Kohli, the solution to their bowling woes and contribution from other batsmen have been the secret to their sudden rise and success. They have seen it all with players being out of form, losing matches they should have won and their skipper playing with stitches and scoring a ton. These things may well be signs of RCB heading towards their maiden IPL trophy on May 29. 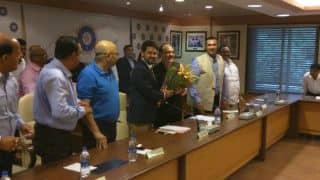 Anurag Thakur elected BCCI President; one of the youngest to the post