Thala is back. If you do not know who Thala is, you may offend people from Tamil Nadu.

Thala is back. If you do not know who Thala is, you may offend people from Tamil Nadu. Their devotion for MS Dhoni is as sacred as it is for Rajnikanth.

378, too, is back the jersey numbers of Suresh Raina, MS Dhoni, and Ravindra Jadeja respectively. Yes, Chennai Super Kings (CSK) mean that much to people from this side of the world. Come Indian Premier League (IPL) and the yellow flags paint the city with joy. And after a ban of two years, their bottled-up passion will break loose in IPL 2018.

A franchise can retain a maximum of three capped Indian players, two overseas players, and two uncapped Indian players. Ahead of the auction, three of these players can be retained and CSK, for all the obvious reasons, retained the 378 trio during IPL Player Retention. “For Dhoni it would be like returning home, 100 per cent. That s what he also said during the TNPL, franchise director George John had said last month.

What is right to match (RTM)?

Here’s what Vishal Mehra had mentioned in IPL 2018 retention policies and auctions:

CSK have not retained Dwayne Bravo who is now back to be auctioned.

Suppose Royal Challengers Bangalore and Delhi Daredevils fight for Bravo in the auction and settle for INR 20 crores.

At this stage, CSK can claim RTM and pay exactly that amount for Bravo to acquire him. In other words, CSK do not have to outbid anyone to claim Bravo: merely matching will do. Now if RCB or DD or anyone else bids for more than 20, the battle will continue. But, Vishal also tells us that a franchise can RTM a player at most twice.

CSK also have Brendon McCullum. He usually opens the batting for them, followed by Raina at No. 3, Dhoni and Bravo in the middle order and Jadeja provides late blitz. Now, wait. Andrew Tye, who played for Gujarat Lions in the previous season, played for CSK before the ban. Should they go for him instead of McCullum? Yes. He has taken three hat-tricks (two in BBL and one in IPL) within a year’s time, and is quite handy with the bat as well. Blending his array of variations with Bravo’s deceitful bowling would make a deadly combination.

CSK, however, can still opt for McCullum if no one goes for him in the auction.

Ravichandran Ashwin played with Dhoni for Rising Pune Supergiant. And as indicated by Dhoni, CSK will aim to bring back Ashwin in the unit. For some reasons he was under-bowled. Smith played for Gujarat Lions, Negi for Royal Challengers Bangalore, and Mohit for KXIP.

CSK already have the 378 trio, and may RTM for Bravo and Tye. The remaining bunch, however, depends on the money in their pocket. 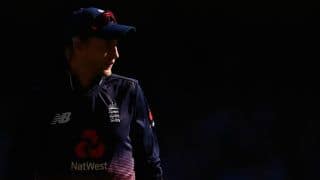 Joe Root pulls out of Australia Tri-Series; available for ODIs against New Zealand