Chris Gayle’s sixth IPL hundred lit up Mohali as Kings XI Punjab (KXIP) finished with 193 for 3 in their 20 overs against Sunrisers Hyderabad (SRH) in Match 16 of VIVO IPL 2018, at Mohali. Gayle’s hundred was the first by anyone in this edition of IPL. This was Gayle’s 21st T20 hundred, the most by any player in the format and thrice anyone else’s tally. Gayle reached the landmark in 58 balls. He smacked Rashid Khan for 4 consecutive sixes in the 14th over of the innings. The celebrated Afghan leg-spinner finished with 4-0-55-1.

Gayle’s 63-ball 104* included 11 sixes and 1 four (not a typo, you read it right). Gayle later dedicated the knock to his daughter Blush, who turns 2 on Friday, and was present at the ground.

Ravichandran Ashwin surprised everyone by electing to bat. SRH started well, giving away only 13 off the first 3 overs. Gayle then launched an attack on Chris Jordan in the fourth over of the innings. He struck a six and a four, which prompted Williamson to turn to Rashid. Wriddhiman Saha dropped Gayle off Rashid’s first ball. Gayle made SRH pay for the lapse with 2 sixes off Rashid. KXIP had recovered 49 for no loss after Powerplay.

Williamson turned to Deepak Hooda, who bowled 4 dot balls to Gayle to stem the flow of runs. Rashid struck with KL Rahul’s wicket in the next over. But Mayank Agarwal immediately showed urgency and boosted the scoreboard. Unfortunately, he could not convert the start. Siddarth Kaul’s knuckle ball beat him as he failed to clear gully.

Karun Nair walked in the 11th over and helped Gayle add 85 in 44 balls. Nair fell for a 21-ball 31. Aaron Finch, who followed next, broke his spell of golden ducks with a breezy 6-ball 14 that included a four and a six off Rashid, in his last over. Bhuvneshwar Kumar was the pick of the bowlers, finishing with 4-0-25-1.

Gayle had gone unsold in IPL 2011 auctions. He was later picked up as a replacement by Royal Challengers Bangalore (RCB) for Dirk Nannes. The rest is history. He amassed 608 runs that season at 67.55 with a strike rate of 183. Will there be an encore this season? Gayle went almost unsold in IPL 2018 auctions and was a last moment pick by KXIP. He sat out in the first 2 games this season but when an opportunity came, he proved the saying. Age is indeed a number. Thanks to Gayle, we witnessed an animated Kane Williamson. It was SRH’s turn to get consumed by the Gayle storm. 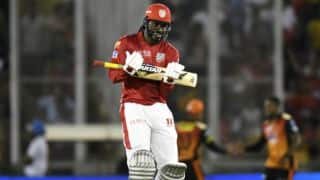 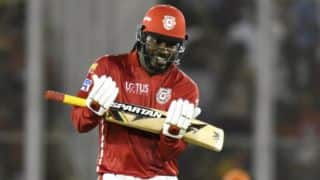