DD need drastic changes, and they need them soon to pull off a turnaround.

It has been difficult being a Delhi Daredevils (DD) fan for some time. They have not made it to the top five in the past five seasons. It is amazing, the way Kiran Grandhi manages to maintain that smiling face at every auction. Things do not look very good for them this time either, after Match 29 of Indian Premier League (IPL) 2018. They need drastic changes, and they need them soon to pull off a turnaround.

At this stage, Sunrisers Hyderabad (SRH), Chennai Super Kings (CSK), and Kings XI Punjab (KXIP) are threatening to break away from the bottom five. If that happens, DD will be at best be one of five teams competing for a single slot. No, the path is definitely uphill.

While Gautam Gambhir has been disappointing, Jason Roy and Colin Munro, between them, have plugged the hole somewhat though not entirely. At the same time, unfortunately, they have blocked an overseas batsman s slot. Chris Morris injury has hurt them.

Trent Boult is currently tied with Siddarth Kaul in race for the Purple Cap (though Kaul has the better average). However, Boult s economy rate of 8.65 has been a concern but then, he can hardly do so many things at the same time (he is also probably the finest fielder in the deep in the world).

Unfortunately, though Rahul Tewatia has 6 wickets (economy 7.47), nobody else has more than 4. All of them barring Liam Plunkett (5.12) have economy rates of 7.33 or worse, and Plunket has bowled only 8 overs. To make things more complicated, Plunkett takes up an overseas slot as well as will Junior Dala or Sandeep Lamichhane, if they play.

Delhi ideally need two bowlers, preferably Indian. What are their options? Sunrisers have an outstanding assortment of Indian seamers, but they are unlikely to release any of them. Chennai Super Kings (CSK) won t let Deepak Chahar go, either.

Delhi may opt for Shivam Mavi of Kolkata Knight Riders (KKR) instead. Young Mavi was taken apart by the Daredevils batsmen, but he showed tremendous character in his next outing, against a dangerous Royal Challengers Bangalore (RCB) line-up. Ankit Rajpoot of KXIP (6.27 an over but only 3 matches) is a more realistic option. And then there are Pradeep Sangwan of Mumbai Indians (MI) and Mahipal Lomror of Rajasthan Royals (RR). Royal Challengers Bangalore are unlikely to part ways with Murugan Ashwin after his performance against KKR.

If DD look for overseas options, however, there are several choices. Lungi Ngidi of CSK, to begin with, can be targeted. SRH may release Chris Jordan. DD may also go for Tim Southee of RCB or Ish Sodhi of RR.

However, if they are really keen on an overseas cricketer, their best is definitely Moeen Ali, who has been warming benches for the first half of IPL 2018. Not only is he an economic bowler, but Moeen can also be used as a floater up the batting order. Without a doubt Moeen will be the most targeted cricketer during the transfer.

Sandeep deserves special mention: his figures for the tournament read 15-0-66-6. Nobody, across franchises, comes anywhere remotely close to his economy rate of 4.40. Mind you, his mates have done well as well. Bhuvneshwar Kumar has gone for 6.86 an over, Siddarth Kaul 6.87, Basil Thampi 7.13, Shakib Al Hasan 7.21, and Rashid Khan 7.25.

Only Billy Stanlake (8.12) has gone for over eight, and that is hardly expensive, and Stanlake has anyway been ruled out of the tournament. There is a reason that SRH have defended targets of 119, 133, and 152 in their last three matches.

And when it comes to wickets, Kaul holds the Purple Cap, Rashid is third, and Shakib seventh. No, they don t need a bowler. In fact, they have surplus.

Unfortunately, it s not the same for batting. Williamson has been in the Orange Cap race for some time (he is currently second, with 322 runs). His strike rate of 133 has been decent (though not outstanding). Unfortunately, the next two Manish Pandey (158) and Shikhar Dhawan (152) have 12 less than Williamson s tally between them. And while Dhawan strikes at 137, Pandey s strike rate is a measly 113.

But there is worse news. Of the batsmen who have scored 25 or more (there are eight of them) Williamson and Dhawan are the only ones to have scored at over 127 every hundred balls. In contrast, CSK have six men who strike at more than Dhawan (five of them over 150, in fact).

No, SRH need at least two solid batsmen, preferably big hitters. However, there is a catch: in Rashid, Shakib, and Williamson they have three men who are guaranteed to take field. They have tried out Stanlake and Mohammad Nabi before settling on Alex Hales. Hales has always been dangerous. He got a cautious 45, and is definitely due for more, but if they play Hales they cannot play another overseas cricketer.

What are their options? Faf du Plessis (Chennai) is definitely an option. Mumbai Indians (MI) have included JP Duminy only once, where he has neither batted nor bowled. If SRH go for one or both them, the experience will definitely bolster the middle-order.

But if Hales plays, SRH may consider Indian batsmen. Delhi Daredevils (DD) are unlikely to give up Prithvi Shaw, just like Nitish Rana or Shubman Gill of Kolkata Knight Riders (KKR) or Ishan Kishan of MI.

Sunrisers may also pursue Murali Vijay of CSK, but they really need a finisher: Dhawan and Williamson have not let them down at the top. Rinku Singh of KKR is an option. Rinku has failed in both appearances for KKR, but a career strike rate of 132 makes him worth pursuing.

Their best bet, however, is Manoj Tiwary of KXIP. Tiwary played a crucial role towards Rising Pune Supergiant s excellent show in 2017. Tiwary has played only once this season, against SRH, which makes him eligible. 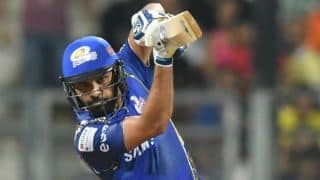 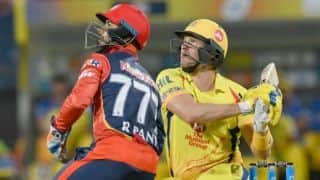