The signs were there for KXIP to see first IPL title but were not to be.

Kings XI Punjab (KXIP) started their Indian Premier League (IPL) 2018 campaign in resounding fashion under new captain Ravichandran Ashwin. With no expectations whatsoever, KXIP won 4 out their first 5 games to zoom to the top of the points table. The streak included wins against Chennai Super Kings (CSK) and Sunrisers Hyderabad (SRH), the two teams who finished at the top of the table. Unfortunately, it turned out to be too good to be true. Over-reliance on some players and rumours of bickering in the management can be cited as reasons for their fall in the second half of the season. However, there were some bright spots in a not so flashy season for KXIP. Lets us read into some of their highlights of the season:

KL Rahul’s season of reckoning: For long Rahul lived under the shadows of Virat Kohli and AB de Villiers at Royal Challengers Bangalore (RCB). At KXIP, he had ample chance to prove himself as a match-winner. Rahul alone kept KXIP in hunt for a Playoffs spot. His knocks against Rajasthan Royals (95*) and Mumbai Indians (90) were among the best this season. His found no support from his teammates in most of the matches were he scored, which saw KXIP lose out on a playoff spot. He is currently the second highest run-getter in IPL 2018 with 648 runs.

Chris Gayle A hit or a miss? Gayle started his season in style, slamming his sixth IPL ton. His scores for KXIP included a run of 63, 104*, 62*, 23, 50 where the side won 4 games out of 5. However, poor form caught up with him shortly afterwards. Even though he scored 368 runs for them, it was not up to the standards one holds for Universe Boss.

Mujeeb mystery Ur Rahman: Mujeeb had a dream IPL debut, knocking over Kohli s middle stump. With all the hype behind him, Mujeeb outfoxed batsmen with his guile match after match. Unlike Afghan teammate Rashid Khan, Mujeeb used variation in speed to great effect. He was KXIP s trump card, picking 14 wickets for them. An injury to his wrist in the business end of the edition, knocked KXIP s campaign off the porch.

Preity Zinta-Virender Sehwag’s alleged spat: Zinta, who had been in a buying spree during the auctions, was seen in a new avatar this season. In a post-match interview, she admitted to taking part in cricketing decisions for KXIP, much to the disapproval of Sehwag. KXIP s loss to Rajasthan Royals did not go down well with Preity, who blamed Sehwag for their poor strategy, which resulted in their argument in the dressing-room. With indecisiveness at the top level, KXIP were seen taking some poor decisions on the field.

If one discards Rahul and Gayle s runs there is hardly anything to boast about for the remaining batsmen. Karun Nair did show sparks of brilliance, which were few matches too late. Mayank Agarwal, Manoj Tiwary, Yuvraj Singh, Marcus Stoinis and David Miller s presence was insubstantial, something that went in against the sides uprising. For KXIP going into the next, it is imperative that gel well together on the field than in commercials.

With ball, however, Andrew Tye shone, especially towards the end of the league stage. Tye finished with 24 wickets, and looks set to clinch the Purple Cap despite the fact that KXIP did not make it to the Playoffs.

Ashwin has definitely gained experience. This season KXIP were on the brink of touching the trophy, but faltered somewhere midway in a herd of many. 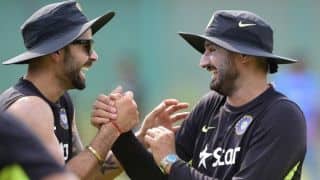