As per BCCI s announcement, IPL 2018 will feature an entirely different set of procedures through which franchises can retain or acquire cricketers. Let us have a look.

By Abhishek Mukherjee and Vishal Mehra

IPL 2018 auctions are going to follow an entirely different set of guidelines. To begin with, the contracts for the cricketers, signed in 2008, were valid only for ten years (in multiple phases). This meant that the contracts had expired after the previous season. As per BCCI s announcement, IPL 2018 will feature an entirely different set of procedures through which franchises can retain or acquire cricketers. Let us have a look.

Q: First things first: will there be ten teams this season or eight?

A: Eight. Gujarat Lions and Rising Pune Supergiant had two-year contracts that expired after last year. They will not feature this season unless something radical happens. Chennai Super Kings and Rajasthan Royals will return to the fray instead.

A: Yes, they were, but rules are rules. Chennai will play but Pune will not.

Q: So you mean to say everything in IPL happens as per rules?

A: Let us stick to the topic, okay?

Q: Fine. What happens to the players who played for Gujarat or Pune?

A: Players who featured for either of the sides and one of Rajasthan and Chennai in 2015 will retain their contracts.

Q: This is confusing. Give me an example.

A: Okay. Consider MS Dhoni. He used to play for Chennai in 2015. Then he played for Pune. This means that Chennai can retain him this time.

Q: Wait, you just said that there will not be any retention anymore!

A: There will be retention, actually. A franchise can retain up to five players in two phases.

Q: So, what was this no-retain nonsense about?

A: I don t know what you have heard, but this is what will happen. A team (Royal Challengers Bangalore, say) can retain three players. For example, they may want to retain Virat Kohli, AB de Villiers, and Kedar Jadhav.

Q: Wow, that is news! Can they retain any three players?

Q: So RCB can retain Kohli, de Villiers, and Jadhav?

A: Yes. But they cannot retain Chris Gayle and Shane Watson along with de Villiers, because all three are overseas players.

Q: Okay. So, how much do they have to pay these men?

A: The players, irrespective of who they are, get paid caps of INR 15 crores, 11 crores, and 7 crores. It doesn t matter whom you allocate what amount. You can pay Kohli 7 crores and Jadhav 15; that is entirely your choice.

A: Yes. The players may not be happy, though. Also, the minimum you can pay an uncapped player is 3 crores.

Q: But I don t have to retain three, right?

A: Three is the maximum. You can retain none or one or two as well. However, if you pick two, the amounts will change to 12.5 and 8.5 crores. And if you retain only one, you have to pay him 12.5 crores.

Q: So, if RCB decide to retain only Kohli, they cannot pay him more than 12.5?

Q: But why will Kohli agree to that? Surely he will expect more this season!

A: Oh, he can decline the retention: there is no contract anymore, remember? That will put him back into auctions.

Q: Does that mean that Bangalore will lose their right on Kohli?

A: Oh, no. They can always buy them at the auction again, maybe for more, maybe for less. Remember what I had said about five retentions and two phases?

A: An acronym for right to match.

Suppose RCB hasn t retained Kohli (or Kohli has refused to stay on). Now Kohli is back to be auctioned.

Suppose Kolkata Knight Riders and Kings XI Punjab fight for Kohli in the auction and settle for INR 20 crores.

At this stage, RCB can claim RTM and pay exactly that amount for Kohli to acquire him. In other words, RCB do not have to outbid anyone to claim Kohli: merely matching will do. Now if KKR or KXIP or anyone else bids for more than 20, the battle will continue.

Q: Okay, so a side can go on RTM-ing for every player they had once owned?

A: Not quite. A franchise can use RTM at most twice. However, if they have not retained anyone during the first round, that count will increase to thrice.

Q: But what if an RTM is outbid? Suppose RCB match the 20-crore bid but Kolkata and Punjab pick it up from there and raise the bar to 25 crores. If RCB do not bid at this point, will RCB lose one RTM?

A: No. RTMs are the opposite of reviews. Success will make you lose one but failure won t.

Q: I think I understand. Tell me something else now. What about the total budget?

A: The franchises can spend up to INR 80 crores each for 2018. However, they will also have to spend at least 60 crores (75% of that amount). If they spend 75 crores, the remaining 5 crores get carried forward to the next year. The budgets for the next two years will be 82 and 85 crores respectively.

Q: What about the team size?

A: A squad has to have at least 18 and at most 25 players. Of these, not more than eight can be overseas players.

Q: Fine, I understand. But I will still miss Pune.

A: We will all miss Pune. I wonder what would have happened had they actually won it last season. 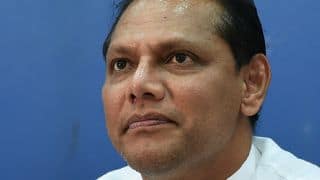 Sri Lanka Cricket to be dissolved?