Kings XI Punjab do not have a leader (they have not had a proper one for some time); they have to take a tough call for the wicketkeeper s slot; and they are an Indian fast bowler too short.

Kings XI Punjab (KXIP) had retained only Akshar Patel, much to the surprise of many. They had let go of Shaun Marsh. At the auction, Preity Zinta seemed to bid for everyone. She finalised on one cricketer after another before losing them as the franchises used their RTM cards. In the end KXIP got some high-profile, mercurial men who can win matches on fail altogether. They do not have a leader (they have not had a proper one for some time); they have to take a tough call for the wicketkeeper s slot; and they are an Indian fast bowler too short.

No captain, no wicketkeeper

Punjab do not have an obvious captain. They have to select one from Yuvraj Singh (their first ever captain who did little of note), Chris Gayle (when did he last lead a side?), David Miller (you know he led Punjab but cannot recall for how long), Aaron Finch (who led Australia in T20Is), and Ravichandran Ashwin (who looks intelligent but is really untested).

And in case they sort that out, they will have to choose one of their two wicketkeepers. The first, Akshdeep Nath, has little credentials of making it to the XI barring the fact that he can keep wickets. KL Rahul, the other option, will make it to batting alone, but does little justice to that wicketkeeper s tag. In other words, Punjab will either have to make Rahul keep wickets or sacrifice a batsman for Nath: you decide which of the two is worse.

A formidable, if inconsistent, batch of batsmen

Yuvraj, Gayle, Miller, and Finch. Perhaps add Marcus Stoinis to the list, too. Look at the names. Every single of them can decide a match on their own. Every single one can perish in pursuit of the big shots, too.

To provide some sanity in the order, Punjab will probably look at Rahul, Manoj Tiwary, Mayank Agarwal, and Karun Nair. Yes, the reserve bench looks quite good.

Keep an eye, or perhaps both, on Ashwin and Akshar. Ashwin has not been a part of India s limited-overs teams of late, but there is no doubting his craftiness. The reliable Akshar will play perfect foil. Both are handy with bat, too. Whether they will play Mujeeb Zadran, the Afghan prodigy, early in the tournament is yet to be seen, but if they do, Punjab will form one of the most deceptively potent spin attacks.

The pace attack is a different story. Andrew Tye is still in form, but his Indian counterparts (Mohit Sharma, Barinder Sran, and Ankit Rajpoot) are hardly as encouraging. 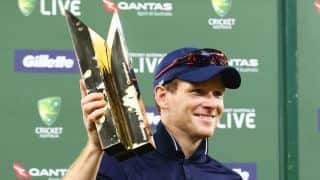