There are some who have the reputation of being T20 specialist with the consistent performances and have dominated IPL with their skills.

The first thing that comes in mind when we talk about the shortest format of the game are power hitting and massive scores. The Superbats and small boundaries make the format seem unfairly tilted towards batsmen. T20 cricket has made the best of the bowlers experience nightmares at times. However, there are some who have the reputation of being T20 specialist with the consistent performances and have dominated IPL with their skills. Here is a list of top five wicket-takers in IPL so far.

Not many will be surprised to see Malinga at the top of the list. He started his IPL career with Mumbai Indians (MI) and has stayed loyal with them till the end. He has taken four 4-wicket hauls and a 5-wicket haul in his career. He has always been dangerous with his toe-crushing yorkers in the death overs. Malinga won’t be playing IPL this year, and will mentor MI bowlers instead. With 20 wickets ahead of the next bowler in the list, Malinga will most likely retain his top position in the list.

Wrist-spinners have dominated T20 more than many would have expected them to. Mishra holds the IPL record of 3 hat-tricks (all for different franchise). He has taken four 4-wicket haul and a 5-wicket haul. At international level he has only played 10 T20Is picking up 16 wickets but hasn’t been seen in Indian colours since 2016. He has been bagged by Delhi Daredevils (DD) for INR 4 crores. Can he claim more than 20 wickets this time to go past Malinga?

The ‘Turbanator’ holds the No. 3 spot. Harbhajan has been a regular member of MI since the first season and has won many matches for them. Till last year he was the most experienced spinner in the squad. However, this year he will be seen in different colors as he will face MI in the opening match. Harbhajan was bought by Chennai Super Kings (CSK) for his base price, INR 2 crores. Can he turn the fortunes for CSK the same way he has been doing for MI?

Chawla’s T20I career (4 wickets in 7 matches) has not really taken off, but he has proved to be a wicket-taking option in IPL. He also held the record of not bowling a no-ball in IPL until 2016. Chawla was retained by Kolkata Knight Riders (KKR), who used their RTM card to acquire him for INR 4.2 crores.

Bravo has been handling the death bowling department efficiently over the past few years. He plays a vital role in the bowling department with his excellent slower deliveries. Every time a batsmen begins an onslaught or a partnership builds, Bravo invariably provides with a wicket. His entertainment on and off-field makes him a perfect candidate for the shortest format of the game. CSK used their RTM card on Bravo for a whopping INR 6.4 crores. He is one of the most-loved players in IPL and has a huge fan base in Chennai. He will be all set to rock this years IPL.

Apart from the top five wicket-takers, Bhuvneshwar Kumar is likely to climb the chart in this edition. He is only 11 wickets behind Bravo. Bhuvi won the Purple Cap in both 2016 and 2017. Ravichandran Ashwin (100 wickets) also has a decent chance. At times Ashwin had opened the bowling in T20Is; now, with the added responsibility of captaincy, it would be interesting to see how he uses himself in the bowling line up. 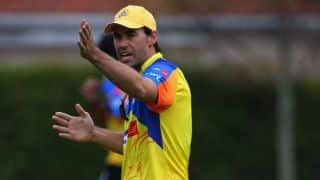