Deepak Chahar and Faf du Plessis were the star of a dominating win for Chennai Super Kings.

Deepak Chahar and Faf du Plessis were the star of a dominating win for Chennai Super Kings on Monday as they climbed up to the top spot in Indian Premier League (IPL) points table with their fifth win of the ongoing season. (READ: Chennai Super Kings go clear with fifth win)

Here we take a look at the deciding phases from their clash against Kolkata Knight Riders at Chepauk:

During their Sunday’s 22-run win against Kings XI Punjab, MS Dhoni was seen giving Deepak Chahar an earful for bowling two consecutive no-balls. Chahar’s expression gave away his embarrassment. He made amends and delivered a tight over. On Monday night, against high-flying Kolkata Knight Riders, he stepped up and how! On a pitch where spinners were to have a party, the right-arm pacer inflicted the maximum damage and that too in the Powerplay overs. He picked up three wickets in three successive overs, including that of opener Chris Lynn (0), Nitish Rana (0) and Robin Uthappa (11) to reduce KKR to 24/4. He bowled 20 dot deliveries during his four-over spell – five of them came in the 19th over to finish with 3/20.

With Chahar breathing fire from the other end, the stage was conducive for the veteran pair of Harbhajan Singh and Imran Tahir to tighten the noose. They combined to bowl eight overs, picked four wickets allowed just 36 runs between them. Harbhajan was the first to make impact of the duo after being pit against Sunil Narine who has been unforgiving against spinners this IPL season. He managed one run off the offspinner before being caught at point. He added one more scalp to his kitty when he had Piyush Chawla stumped in the 16th over. His spell read 4-0-15-2. His partner-in-crime Tahir removed KKR captain Dinesh Karthik and Shubman Gill in consecutive overs, not allowing the visitors any breathing space. His spell read: 4-0-21-2. Ravindra Jadeja was equally effective, with 1/17 from four overs.

With wickets falling in a heap, it was once again the in-form Andre Russell, whose knock saved KKR the blushes of being bowled out for a sub-100 total. He forged a couple of important partnerships with the lower order and struck five boundaries and three sixes in his 44-ball 50. He reached his half-century off the final ball of the innings as KKR limped past the 100-run mark. He came in to bat in the ninth over of the innings with half the KKR side back in the dug-out for just 44 runs. It wasn’t the stage for him to play his usual explosive game with the pitch offering more turn than usual. He adjusted his game accordingly, giving his bowlers some total to defend without going for the big hits. During the course of his innings, he ended up twisting his left hand while going for a run. Later on, with the wickets falling at the other end, he farmed the strike well to ensure KKR weren’t bowled out and creamed 14 runs from the final over.

CSK were chasing 109 – not a big total by any stretch of imagination but a pitch that was assisting bowlers, especially the spinners and the firepower Knight Riders posses in that department, scoring them was still a challenge. Narine failed to provide the start his team expects from him but he made up for it with two wickets inside the Powerplay. He ended Shane Watson’s explosive start at 17 off 9 before sending back Suresh Raina on 14 – both caught by Chawla. Faf du Plessis, who opened alongside Watson, dipped into his vast experience to play a sensible knock. ‘The target was low and so big-hits weren’t required. Instead, he relied on singles while hitting the occasional boundary – three of them in total in his unbeaten 45-ball 43. He stitched two partnerships that drove CSK to their fifth win of the season. With Ambati Rayudu (21), he added 46 runs for the third wicket before joining hands with Kedar Jadhav (8*) for an unbroken 30-run stand ensuring CSK maintain their unbeaten run at home. 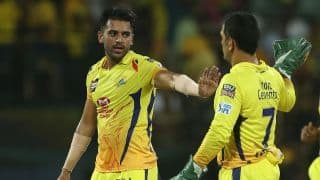