CSK, who have lost two consecutive matches for the first time since re-joining the tournament in 2018 and have been displaced from the first position in the points table too.

Back on home turf, but also on the back of back-to-back defeats, Mahendra Singh Dhoni won the toss and Chennai Super Kings have opted to bowl first on a notorious rank turner against Sunrisers Hyderabad in the Indian Premier League (IPL 2019) at the MA Chidambaram Stadium in Chennai on Tuesday.

CSK, who have lost two consecutive matches for the first time since re-joining the tournament in 2018 and have been displaced from the first position in the points table too, made one expected change with Shardul Thakur making way for Harbhajan Singh.

For Sunrisers Hyderabad, the same team who inflicted a heavy defeat to CSK in their reverse fixture, regular captain Kane Williamson has flown back home due to the death of his grandmother. Bhuvneshwar Kumar is back to leading the side again. Shakib Al Hasan gets to play his second game of the season, while Manish Pandey comes in place of Shahbaz Nadeem.

MS Dhoni: “We will bowl first. It is good to be back at home. We will be here for the next 10 days. When you are not travelling it brings down the fatigue. We have made one change, Harbhajan comes in place of Shardul Thakur. our top-order needs to be consistent. All the batters have been batting well but they need to take care of their shot selection.” (LIVE, Chennai Super Kings vs Sunrisers Hyderabad)

Bhuvneshwar Kumar: “We would have bowled first too. We will miss Williamson but Warner and Bairstow have been brilliant for us. Not really worried about the middle-order, they have not got much chance in the middle. But we all know they are talented. Manish Pandey comes in place of Nadeem.”

CSK are second on the points table with seven wins from 10 games, while SRH occupy the fourth spot with five wins from nine games. (POINTS TABLE, CLICK HERE) 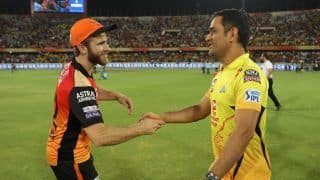 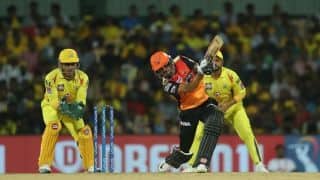