Game 10 of Indian T20 League between Delhi and Kolkata produced the first Super Over contest of the season.

Game 10 of Indian T20 League between Delhi and Kolkata produced the first Super Over contest of the season. (READ: Rabada holds his nerve)

Here are the highlights of the match

Shreyas Iyer is a quick learner. He doesn’t shy away from admitting his mistakes either. Giving an example of it, he opted to field after winning the toss against Kolkata on Saturday night at Kotla. He had chosen to defend against Chennai the other night and seen his team suffer their first defeat of the season. The home team made four changes to their playing XI and two of them brought them immediate results Sandeep Lamichhane removing Nikhil Naik and Harshal Patel accounting for Robin Uthappa in the Powerplay. Kagiso Rabada then combined with Rishabh Pant to dismiss Chris Lynn right in the seventh over before Patel struck again to neutralise in-form Nitish Rana (1). Rabada, Patel and Lamichhane then played parts in running out Shubman Gill that left the visitors struggling at 61/5 in 9.1 overs.

Having their opponent on the mat, Delhi would should have gone for the kill. However, they failed to negotiate the threat posed by Andre Russell who has started the season in red-hot form winning consecutive matches for his team both with the bat and ball. This time, he had his captain Dinesh Karthik for company and together, they dig their team out of a hole, adding 95 runs for the sixth wicket. Russell took just four deliveries to settle before clubbing Amit Mishra for a six over long-off. He would hit five more of those and four fours as well in a blistering knock of 62 off 28. Karthik played an impressive hand as well, scoring 50 off 36 with five fours and two sixes. From 61/5, Kolkata went on to post a challenging 185/8.

Prithvi Shaw had a slow start to his season, managing 31 runs in the first two matches. The failure of openers to put up a good partnership had been putting undue pressure on Delhi’s middle-order, especially Rishabh Pant. Alongside Shikhar Dhawan, the 19-year-old was looked determined to correct the anomaly. The start was good Dhawan had peeled off two fours and a six within the first three overs before holing out for an 8-ball 16. Shaw then took the lead, with a four and six off consecutive Russell deliveries as Delhi finished the Powerplay at 45/1. After 10 overs, Delhi were 82/1 needing 104 from 60 deliveries. Captain Shreyas Iyer and Shaw shifted gears. Shaw sprinted to his fifty with a six, couple and a four off Kuldeep Yadav. He was in hunt for a maiden league century and entered the 90s with three fours in an over of Prasidh Krishna.

Delhi needed 18 off 18 with eight wickets remaining. They had a well-settled Shaw and big-hitting Rishabh Pant in the middle. Kuldeep, who had been creamed for 33 runs off his first two overs, came on to bowl. Easy peasy? Nope. What should have been a comfortable nearly turned into a disaster. Kuldeep removed Pant while allowing just three runs. Equation became 15 off 12 and still favouring Delhi. Shaw had just been given a life on 97 and added two more runs to his total. And then he went after a short delivery from Lockie Ferguson result? A top-edge that nestled into the gloves of wicketkeeper Karthik. Shaw had fallen on 99 – the third time in league’s history a batsmen had missed a century by one run. Meanwhile, Ingram had just scored a boundary and Delhi quickly got over the heartbreak of Shaw missing a maiden ton as they eyed win, needing five from final over. Ingram and Hanuma Vihari took four off four. And then Vihari holed out off the penultimate delivery before Ingram was run out while looking for a second run. Delhi finished on 185/6 and the action moved to Super Over.

Delhi managed 10/1 from their six deliveries. Rabada was asked to defend the target. Russell wiped off four runs off his first delivery. He then fired three perfect yorkers the second of which cleaned up Russell. Off his final three, Kolkata managed three singles to finish on 7/1. Rabada had done it. 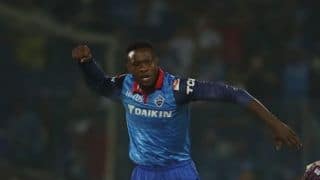 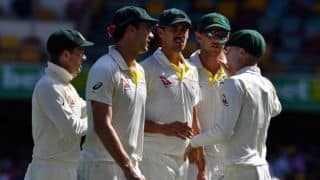