With the win over RR the Shreyas Iyer-led side toppled Chennai Super Kings to occupy the top spot in the points table.

Ajinkya Rahane‘s hundred went in vain as Rishabh Pant and Shikhar Dhawan guided Delhi Capitals to a six-wicket win over Rajasthan Royals in Jaipur on Monday. With this victory, the Shreyas Iyer-led side toppled Chennai Super Kings to occupy the top spot in the points table.

For far too long, Rahane s problem in limited-overs seemed to be a cluttered mind. He has got his repertoire of shots but tends to get bogged down far too often. Hence, the Rahane which we saw on Monday was a wonderful breath of fresh air. Heck, it was like watching a vengeful Rahane, making a statement for being stripped off Royals captaincy. The last Rahane batted so smoothly and effectively was perhaps the 2015 World Cup game against South Africa. But this one was even better. They way he took after being dropped early in the innings was phenomenal. After being involved in a run out that resulted in the run out of Sanju Samson, Rahane took charge, and scored at a run-rate of over 13. After the drop, Rahane scored 89 off 45 and it was only due to his tiredness towards the end that Rahane s strike-rate dropped a little. Besides that, the former Royals captain was flawless and full of intent as he brought up his second IPL century, first since 2012.

By the 13th over mark, the Royals were cruising at 135 for 1 with Rahane and Royals captain Steven Smith batting disdainfully. With seven overs to go, Royals would have fancied to easily cross the 200-run mark and then some with some big hitters to come. But instead, the final passage of the first innings belonged to the Capitals, with the likes of Kagiso Rabada and Chris Morris and Ishant pulling things back tremendously in the end and giving away just 56 runs in the final five overs. Royals lower-middle order disappointed again, with Ben Stokes poor run of the season continuing and Ashton Turner enduring a third straight duck in a row. It was left to a tired Rahane to keep Royals going till the very end.

In order to catch the Delhi batsmen off guard, Royals tried their best to ensure that the batsmen did not get a good look-in of the bowlers. For this, the Royals made six different bowlers operate in the first seven overs. Stuart Binny, Shreyas Gopal, Jofra Archer and Jaydev Unadkat bowled an over each and Dhawal Kulkarni sent down a couple. But their plans didn’t quite work out as well as they’d have hoped to as the Capitals scored at almost 10 runs an over to reach 67 in those seven overs. This included a seven-run over each from Binny and Unadkat. Prithvi Shaw and Dhawan played an array of shots and collect 62 in the remaining five and as the Capitals were off to a breezy start in their chase of 192.

Dhawan sets the tone in chase

If you look back at the type of innings Dhawan played for the Capitals in the first-half of the tournament, the opener looked slightly muddled in his approach till he smashed 97 against Kolkata Knight Riders. Ever since, Dhawan has played with a lot of freedom and there’s sense of positivity about his batting. Dhawan’s onslaught from the outset had given the Capitals the ideal start and more importantly, allowed the erratic Shaw to settle. Dhawan took Kulkarni for 12 runs in the second over and bludgeoned Gopal for 15 in the fourth. He scores three boundaries more off Kulkarni in his second over to bring up a rapid half-century, off just 25 balls.

Dispelling the disappointment of his World Cup snub, Rishabh Pant arrived when the Capitals had lost Dhawan and skipper Shreyas Iyer in quick succession. In a big chase, one more wicket would have turned things upside down for the Capitals. But Pant prevented his team of a collapse and played with a lot of temperament. In the last few innings, Pant had fallen to what many have claimed to be irresponsible and ambitious strokes, but this time he was a lot more level-headed. In the company of a set Shaw, Pant played the ball on its merit and once set, brought out his range of shots. Once Pant is in his elements, there mostly seems to be just one outcome, and in this scenario, the Capitals had benefitted from his knock to help displace Chennai Super Kings as the No. 1 side on the leaderboard. 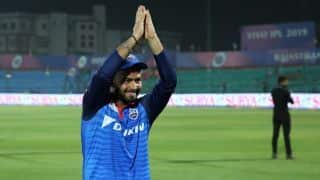