For most part of the tournament, the CSK-KKR encounter was billed the battle of the top two sides, and as per the standings, they still continue to take the first two spots.

It wasn t too long ago that Chennai Super Kings (CSK) and Kolkata Knight Riders (KKR) had met in the Indian Premier League (IPL 2019). As a matter of fact, it was just four days back that CSK got the better of KKR rather comprehensively by seven wickets. Since, CSK have continued their winning momentum, clinching a last-ball humdinger against Rajasthan Royals (RR), while KKR have endured a second consecutive defeat, a result that might just be beginning to become dangerous, considering how the likes of Mumbai Indians (MI) and Delhi Capitals (DC) are starting to climb up on the leaderboard.

For most part of the tournament, the CSK-KKR encounter was billed the battle of the top two sides, and as per the standings, they still continue to take the first two spots. However, KKR is one of the four teams with eight points, on top only due to a superior run-rate, but Mumbai are starting to peak at the right time and one more defeat going forward might see KKR slip down the rankings and play catch up.

Contrary to their previous matches, KKR have been outplayed in both matches. Against CSK, their batting fell apart and against the Delhi Capitals, the bowlers came under the pump with Shikhar Dhawan taking them on. (ALSO READ: Shikhar Dhawan opens up on missing maiden IPL century)

Robin Uthappa and Nitish Rana have combined to score three half-centuries and their inability in the middle order is one of the prime reasons hurting KKR in the middle overs. Benefitting from their fine run in the first-half of the tournament, KKR should be seeking a fresh beginning as the teams begin their second round of matches. (ALSO READ: Win against Kolkata gives us tremendous confidence to face SRH: Shreyas Iyer)

There s absolutely no worries for their opponents CSK though. They are the team with just one loss and six wins. Each time they ve found themselves in trouble, the players the skipper in particular have bailed them out. Case in point, the previous game, where from 24 for 4, MS Dhoni and Ambati Rayudu added an inspiring 95-run stand for the second wicket with the skipper scoring a half-century and later returning to question the umpire s decision after he reversed his decision of a no-ball. Rayudu was perhaps the only concern for CSK but those concerns were banished with a half-century.

Weather: Slightly overcast with a high of 36 degree

You can also follow LIVE action of the match on CricketCountry (Kolkata Knight Riders vs Chennai Super Kings: SCORECARD)

With six successive 40-plus scores, Andre Russell has been KKR s MVP but as per reports, the West Indies allrounder may be a doubtful starter having aggravated his wrist injury which he sustained during the CSK clash. After scoring a 21-ball 45 against Delhi, Russell limped off the field without completing his overs and did not even come out during the presentation ceremony. (ALSO READ: Jacques Kallis decodes KKR s batting phenom Andre Russell)

The final call on Russell s availability will be made on the day of the match. With Sunil Narine and Chris Lynn already out with an injury scare and flue, KKR would hope them to recover in time to slot in for the injured Russell. If Harry Gurney is fit, KKR might rest Lockie Ferguson, who has gone wicketless in the last two matches.

CSK might be tempted to bring back Harbhajan Singh as he s managed to keep the openers quiet, and with an explosive KKR top order, the offspinner is a golden bet. Mitchell Santner had an impressive outing and he might retain his place, but if CSK are to revert and stick to the same combination that helped them beat KKR on Tuesday, he might be replaced by fellow New Zealander Scott Kuggeleijn. There is still no clarity over Dwayne Bravo s fitness.

“He has a bit of an issue. He braved that and still went on to play this game. He is always a special cricketer. We will take a call day after,” Dinesh Karthik on the availability of Russell 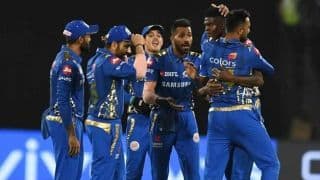