While there were nerves at the end as Russell went after RCB bowlers, RCB managed to register their second win of the season.

The second meeting between Kolkata Knight Riders and Royal Challengers Bangalore, two teams loaded with batting superstars, dished out another high-scoring encounter this IPL season. The visitors trumped thanks to a century from Virat Kohli and a Moeen Ali‘s 28-ball 66.

We take a look at the phases from the match that proved decisive:

Batting first, RCB found themselves in a run after losing opener Parthiv Patel early. Despite the presence of captain Virat Kohli in the middle, they plodded to 60/2 in 9 overs. Enter Moeen Ali. The allrounder changed the complexion of the innings, as his skipper would acknowledge later on. He took the attack to the KKR bowlers, signalling his intent with a six over long-on off Kuldeep Yadav in the 10th over who would bear the brunt of his assault. He hit boundaries against everyone Russell, Piyush Chawla, Prasidh Krishna but was partial to chinaman Kuldeep whose horror season continued. The full force of his attack was felt in the 16th over when he blasted four, six, four, six, six off successive deliveries from Kuldeep before perishing off the final delivery. He had blazed his way to 28-ball 66.

The dismissal of Moeen didn’t affect RCB’s run-flow. His teammates took advantage of the momentum his innings had given with Kohli and Marcus Stoinis clubbing 64 runs from the final four overs. Kohli, who made a slow fifty, picked up the pace in the late stage, entering the 90s with a six and four off successive deliveries in the penultimate over. He entered his first IPL century since 2016 with a four off the penultimate delivery of the RCB innings before being dislodged off the following. But his 58-ball 100 and Stoinis’ unbeaten 8-ball 17 had pushed RCB to another 200-plus total.

How much RCB needed one of their bowlers to step up and provide the leadership in the department is a known fact. They have failed miserably as a unit when it comes to bowling barring legspinner Yuzvendra Chahal. Dale Steyn, playing in his first match of the season after being added as a late replacement, started making the difference from the first delivery itself. Had Stoinis not dropped Chris Lynn off the first delivery of KKR’s chase, Steyn would have a wicket first-ball. But that didn’t matter much as the South African legend got his man off the sixth delivery. He delivered three overs in the Powerplay while taking two wickets and allowing just 22 runs. He would later return in the 18th over but then Nitish Rana spoiled his figures taking 18 off his final over. However, Steyn’s opening spell had the set the stage allowing fellow pacer Navdeep Saini (1/31) to settle in as well.

RCB and KKR’s No. 4 played contrasting innings during the contest. Kohli starred with his first century of the season but Robin Uthappa struggled to time the ball. Before hitting his first four, Uthappa consumed 11 deliveries for just three runs. Had it not been for RCB’s sloppiness, he would have been run-out on 9. But he didn’t capitalise, falling on the same score off 20 deliveries. By then, KKR were through playing 12 overs and needed 133 off 48 deliveries. His slowness also delayed Russell’s arrival and possibly handed RCB the match.

Russell nearly does it

RCB were nearly made to live their worst nightmare, again. The man responsible for that was Russell who again threatened to steal another high-scoring chase with his incredible power-hitting despite a steep asking-rate. Arriving at the crease with his side almost out of the contest, the Jamaican resurrected the chase hitting two fours and nine sixes in his 25-ball 65 before being run-out. In his company, Rana also left accelerated belting nine fours and five sixes in an unbeaten 46-ball 85. However, the middle-overs proved decisive as KKR fell short of the mark by 11 runs. 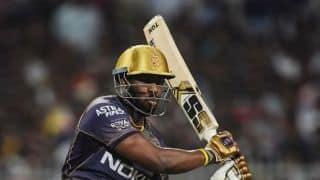