Chennai Super Kings continue to prove their superiority with yet another all-round show as they bossed the visiting Kolkata Knight Riders in a top-of-the-table clash on Monday night.

As expected, the Chepauk pitch continued to favour the spinners who co continued to make a telling contribution into CSK’s winning run at home this IPL season. Despite the trio of Harbhajan Singh, Imran Tahir and Ravindra Jadeja strangling KKR, neither of them was the star of the show. It was a pacer, Deepak Chahar, who stole the limelight with a devastating spell in the Powerplay that pushed KKR on the backfoot as they posted a low 108/9.

Chahar finished with excellent figures of 3/20 from four overs. 20 off his 24 deliveries were dot! CSK chased down the target with relative ease for a seven-wicket win.

Before the contest, KKR had taken the top spot with CSK breathing down their neck at second. However, post their much-awaited clash, the two teams have traded places with MS Dhoni-led CSK back at the top of the pile.

They have won five of their six matches so far which has pushed their points tally to 10 and an early finish has also helped in improving their net-run rate (from 0.159 to 0.310). KKR, with eight points, have surrendered the top spot but they have the second-best NRR in the league which stands at 0.614 behind Sunrisers Hyderabad’s 0.810.

While CSK and KKR switched spots, others in the stands remained where they have been. On Tuesday, both Kings XI Punjab have a chance to, at least, replace KKR at the second spot, when they face Mumbai Indians at the Wankhede.

Currently, they are at the third spot with eight points and if they manage to beat MI and that too with a crushing margin, they can also improve their NRR which currently is -0.061.While MI are fifth among the eight teams, they too can move to as high as second depending on how crushing their win turns out to be. 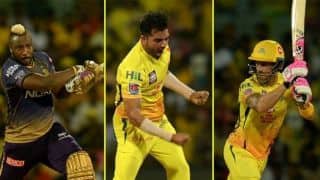 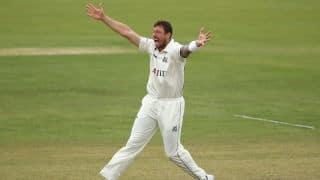