Dhoni vs Karthik, Dhoni vs Narine, Russell vs Tahir and other talking points ahead of CSK vs KKR.

This match pits together the top two teams of the league, who each have eight points after five fixtures.

Here are the major talking points ahead of tonight’s match:

How can CSK stop Russell?

Andre Russell has been virtually unstoppable in the IPL. In four innings, he has totalled 207 runs off 77 balls for a strike-rate of 269. His 22 sixes are the most so far, and he has hit a boundary every 2.3 deliveries. (VIDEO: CSK out to contain Andre Russell in marquee clash)

All four of his innings have been mighty impactful, most stunning his last one: 48 not out off just 13 balls (strike-rate 369.23) to take Kolkata to a scarcely believable chase of 206 with five deliveries to spare.

How do you stop a man in such form?

Chennai may or may not have the answer, and so much depends on the type of pitch at the MA Chidambaram Stadium. It has aided spin so far, and thus MS Dhoni may have to target Russell with spin. Virat Kohli erred by feeding Russell pace over the weekend, which resulted in the allrounder teeing off for fun.

Is Tahir the man for Russell?

Imran Tahir is Dhoni’s go-to spin bowler, and he may be the man that the Chennai skipper opts for whenever Russell comes out to bat. Tahir has claimed Russell’s wicket three times in 19 deliveries, from which Russell has managed 13 runs. (READ: Chepauk awaits battle of spinners)

In such times, when opponents are searching for ways to shut down Russell, Tahir looms as a huge figure. Of course, it isn’t without risk given Russell’s form.

Dhoni’s tactical acumen against Dinesh Karthik‘s mind. In the last match between Kolkata and Rajasthan, Karthik’s choices of bowlers and field placements stymied Rajasthan Royals. Overall, his captaincy in the IPL has been sharp since he took over at KKR and this has helped the team make the playoffs. Dhoni, of course, is an IPL captain par excellence and this match pits the pair together.

How Karthik operates his bowlers against the struggling Chennai top order and versus Dhoni, at a venue he knows very well considering this is his hometown, promises to be an interesting subplot. And Dhoni … well his main task is stopping Russell.

In all T20s, Sunil Narine has bowled 74 deliveries at Dhoni from which the CSK captain has scored 38 runs. While Dhoni has only fallen to Narine once, his struggles to dominate the West Indian spinner is an aspect that Karthik should look to exploit.

This season, Dhoni is Chennai’s leading run-getter with 156 from four innings, three of which have been unbeaten. His strike-rate? 124.80. Watch closely how he goes against Narine, who has yet to hit top gear in the competition. 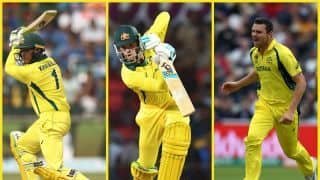