Delhi Capitals are the only team apart from Chennai Super Kings, who have managed to get the better of Kolkata Knight Riders this IPL season. Considering DC are coming to Eden Gardens after a win in their previous match and KKR being brought back to earth by CSK in their last match, the contest promises to be one tasty affair.

Here we take a look at the talking points ahead of their meeting tonight:

Andre Russell has batted five times this IPL and each of his innings has mattered. Three of them have resulted in stunning victories, one helped them to a tie and one in defeat. Clearly, he’s the man in form. Delhi have faced his wrath before and with Ricky Ponting and Sourav Ganguly for brains, they must have worked out a strategy to neutralise him. Russell’s teammate Kuldeep Yadav has claimed to have figured out his weakness which he says is against the turning ball. DC spinners will have to take the lead on this front.

Over reliance on Russell?

Are Knight Riders overly reliant on Russell? Surely, he has been at the forefront of their most wins this IPL season [barring one against Rajasthan Royals]. Time and again he has bailed them out of trouble and put them in winning positions. Should Russell fail, do KKR have a backup plan then? Middle-order has to step up now with the season entering a crucial phase where all permutations and combinations start coming into play as far as qualification for the knockouts go. Not that KKR have to worry on that front right away. With four wins in six matches, they are fairly at a comfortable spot now but things can change quickly.

To chase or defend?

Another point to consider for DC is whether to bat or bowl should they win the toss. It’s obvious what Kolkata Knight Riders will be should the coin fall in their favour field first. They have been setting their opponents an open challenge to set targets which they [read Russell] can’t chase. Two of their three wins have come while chasing, although one of them was in Super-Over.

Not Prithvi Shaw, not Shikhar Dhawan, not even Rishabh Pant – Kagiso Rabada, the South African speedster, has been Delhi’s most reliable bet so far. With 11 wickets, he is the current Purple Cap holder. He delivered a world-class performance in the Super-Over win against KKR earlier in the season. Then he returned figures of 4/21 against Royal Challengers Bangalore for a much-needed confidence-boosting win to break a run of two straight defeats. And he got the better of Russell last time.

Mumbai Indians recently became the fifth team in IPL history to record 100 wins. KKR will be aiming to become the sixth when they take field tonight. Also, KKR opener Chris Lynn is just a single away from completing 1000 runs for KKR. 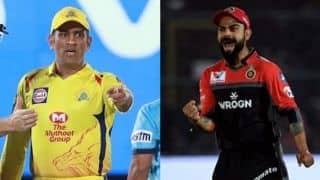