Chennai Super Kings and Mumbai Indians the two most successful teams in the history of IPL with three titles each renew their rivalry when they meet for the third time this season.

Chennai Super Kings and Mumbai Indians the two most successful teams in the history of IPL with three titles each renew their rivalry when they meet for the third time this season in the Qualifier 1 at MA Chidambaram Stadium.

However, Tuesday won’t be the first time that two IPL behemoths will lock horns in playoffs – this will be the fifth such occasion that the Yellow of Chennai and Blue of Mumbai will be squaring off during this stage.

Here we look at how the previous four meetings between the two teams have transpired: –

The two teams kickstarted the season with MI recording an emphatic eight-wicket win. They met for the third time, in the Eliminator, at M Chinnaswamy Stadium in Bengaluru. Mi opted to field and Dhawal Kulkarni landed body blows in successive deliveries with the scalps of Murali Vijay and Suresh Raina in the second over. From thereon, CSK managed to stitch together significant partnerships that eventually pushed them to 187/5. Captain MS Dhoni starred with an unbeaten 20-ball 51 while Dwayne Bravo smacked 33 not out off 14. MI began well before Sachin Tendulkar was run out in the fifth over. Regular wickets kept them on the backfoot and they eventually managed 149/9.

The team met a total of four times twice in the league stage, once in the qualifier and then a final showdown. MI took the psychological edge after beating their famed rivals in both league matches. However, CSK topped the table ahead of Mi at second. CSK exacted revenge thanks to superlative half-centuries from Michael Hussey (86*) and Raina (82*) to post 192/1 at Kotla in Delhi. In reply, barring opener Dwaye Smith’s 28-ball 68, other MI batsmen failed to put up s significant total to be bowled out for 144 in 18.4 overs.

CSK finished third but got the better of MI in both their league stage encounters. MI finished fourth and the two teams met in the eliminator at Brabourne Stadium. Dhoni asked the defending champions to to bat first. Openers Lendl Simmons (67) and Michael Hussey (39) led a solid start before CSK limited them to a manageable 173/8. Their chase began in blazing fashion with Dwayne Smith and Faf du Plessis adding 60. Harbhajan Singh then removed both in the space of four deliveries as MI regained some control. But Raina, the playoff king, struck an uneaten 54 while David Hussey scored 40 not out with CSK overhauling the target in 18.4 overs.

In the league stage, the honours were shared both teams registering six-wicket win each. CSK took the top spot while MI claimed second to book a date in Qualifier 1. Opting to bat first at the Wankhede, MI’s batting was first driven by their openers Simmons (65) and Parthiv Patel (35) as they added 90 runs. And then Kieron Pollard provided the late blitz with a 17-ball 41 to power them to 187/6. Lasith Malinga starred with the ball with 3/23 as he removed Dwayne Smith with the fourth delivery of the chase. Vinay Kumar and Harbhajan Singh chipped in with a couple of wickets each as CSK weren’t allowed to settle into a rhythm. They were bowled out for 162 in 19 overs. 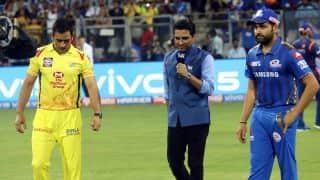 Chennai Super Kings vs Mumbai Indians, Qualifier 1, IPL 2019, LIVE streaming: Teams, time in IST and where to watch on TV and online in India