The first week of IPL 2019 has passed and it is time to look back at pick the Player of the Week. From the past eight days of action, two names presented themselves: David Warner and Andre Russell.

Both players have been instrumental in their respective franchises sitting at No 2 and No 3 on the IPL 2019 leaderboard, respectively. Sunrisers Hyderabad are top courtesy a better net run-rate of 2.111 to Kolkata Knight Riders‘ 0.555. Both teams have played three games, won two and lost one.

A tough call, but our vote goes to Russell because of the impact he’s had in all three of KKR’s matches. And he’s taken five wickets to sit at second place in this year’s chart. (KKR vs KXIP highlights: Russell gets a life, Rana has a blast)

In Kolkata s thrilling victory over Hyderabad on day two of the IPL, Russell was the game-changer with a ballistic unbeaten 49 off 19 balls. Having taken two of the three SRH wickets to fall at Eden Gardens, Russell walked out to bat after Dinesh Karthik was dismissed in the 13th over. Chasing 192, Kolkata were 95/3.

In the IPL s 11-year history, no team had ever chased more than 52 runs in the last three overs of a game. Kolkata needed 53 off 18 balls, and Russell was nine off seven. He hit 18 in five balls during Siddarth Kaul s 18th over, then moved to 48 off 18 at the end of the 19th bowled by Bhuvneshwar Kumar. That meant that Kolkata scored 40 runs in 12 balls. Needing 13 off the last over, the hosts won with two balls to spare.

In KKR’s second game, Russell was on 3 off 5 balls when he was bowled by Mohammed Shami, but when the umpire signalled a no-ball and free hit because Kings XI Punjab captain R Ashwin had not counted how many fielders he had kept inside the ring, the West Indian was give a massive slice of luck.

Russell then hit eight successive boundaries in a stunning display of power hitting to end on 48 off 17 balls. Of those, 45 came after he had been given a life.

In Kolkata’s third match, against Delhi Capitals at the Feroz Shah Kotla, the team was in a hole at 61/5 but thanks to Russell and Karthik they got to 185/8. Russell slammed 62 off 28 balls, with four fours and six sixes, for a strike-rate of 221.42. Subtract that third consecutive blitzkrieg from Russell and KKR would have been sunk.

KKR lost in the Super Over, with Kagiso Rabada’s yorker to bowl Russell prompting Delhi’s mentor Sourav Ganguly to term it “the ball of the IPL” but once again Russell’s stamp was imprinted.

And then there was his bowling. In the win over SRH, Russell claimed two of three wickets that KKR managed. Against KXIP at Eden Gardens, Russell dismissed Chris Gayle inside the Powerplay and added Sarfaraz Khan to finish with 2/21 from three overs. Against Delhi, he took Shreyas Iyer’s wicket.

Three matches, three stunning performances from Russell. For that, he’s our Player of the Week. 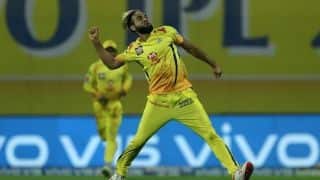