Following RR's win, we analyse a few passages of play which may have had an impact in the outcome of the match.

Rajasthan Royals managed to stay alive in their race for a Playoff berth with a seven-wicket win over Sunrisers Hyderabad with many factors leading to the result. The Royals bowled phenomenally towards the end to contain Sunrisers and when it was their turn with the bat, Liam Livingstone and Sanju Samson hardly broke a sweat to see the side through.

Following RR’s win, we analyse a few passages of play which may have had an impact in the outcome of the match.

David Warner played an unusual innings of 37 off 32 balls and surprisingly went without a boundary. He was aided by some ordinary display on the field by the Royals who misfielded and gave away the odd overthrows. It is what led to Warner having a strike rate of over a 100 without finding the boundary even once. On the verge of scoring his fifth straight half-century of the season, Warner simply couldn t get going and relied on twos and threes to ensure on a surface where scoring runs wasn t the easiest. The again, Warner not scoring a single boundary is not something to hear everyday. There were three overthrows in the first two overs, Liam Livingstone being the guilty part on both occasions and Royals conceded almost 20 runs via their sloppiness which allowed the Sunrisers to finish the Powerplay on 51 for 1.

Pandey gives Sunrisers a move on

With Warner struggling, Manish Pandey took over the mantle and provided the Sunrisers a move on. Coming off an electrifying 83 off 49 balls against the Chennai Super Kings, Pandey was in the groove again adding 75 runs with the Australian opener for the second wicket. Warner did the sensible thing to had Pandey most of the strike which in hindsight turned out to be a productive move. Pandey s first boundary was a crunching cover drive off Shreyas Gopal, opening the gates to a flurry of boundaries in the next eight overs. He reached his half-century off 27 balls providing Sunrisers with a much-needed impetus on a sluggish surface.

It is not rocket science which no team hasn t found out by now. Sunrisers middle order is far from effective. While on one hand, teams like Kings XI Punjab and Mumbai Indians have relied on their middle order to bail the team out of trouble, the same cannot be said about the Sunrisers. Pandey s heroics had rocketed Sunrisers to 103 for 1 at the end of 12 overs, but lack of firepower in the middle came back to hurt their progress. Between over 13 and 19, Sunrisers managed just a meagre 39 runs, and it was due to Rashid Khan s 18 runs in the final over which got them to 160.

Prior to Saturday night s game, Livingstone the allrounder had played just one game in the IPL, against Mumbai Indians where he scored one and gave away 13 runs in two overs. He was drafted back into the side in place of Jos Buttler, out on national duty. In the first half of the match, Livingstone had endured a horror period giving away three overthrows, hence, when it came to make amends with the bat, the 25-year-old did not disappoint. Playing a Buttler-like knock, Livingstone boldly stood up to the Sunrisers bowlers, creaming 20 off Siddharth Kaul s opening over. He smoked 44 off 26 balls with four boundaries and three sixes and together with Rahane, provided the Royals brisk start of 78 inside in nine overs.

Turner finally gets the money off his back

After Livingstone and Rahane had departed, Samson and Steve Smith had added 55 runs for the fourth wicket to get the Royals close to the finishing line. However, when Smith fell for 22 off 16, equation read 13 off 18. In walked Ashton Turner, with five consecutive ducks behind him in T20s. But to his and the entire Royals franchise s relief, Turner was able to get some bat to a delivery from Bhuvneshwar to finally pinch that much-awaited single. Even though he possessed a poker face, the crown appreciated in applause, as did Bhuvneshwar. With the monkey off his back, he saw Samson stroke his fourth boundary to keep Royals alive. 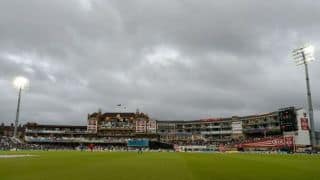 Today's Best Pick 11 for Dream11, My Team11 and Dotball - Here are the best pick for Today's match between KKR and MI at 8pm