The DC win which overshadowed a sublime century by Ajinkya Rahane, takes them to the top of the table with 14 points from 11 games.

Rishabh Pant (78*) and Shikhar Dhawan (54) led from the front with fluent knocks with Prithvi Shaw chipping in with a scratchy 42 to lead Delhi Capitals to a clinical six-wicket victory in their Indian Premier League (IPL 2019) clash against Rajasthan Royals at the Sawai Mansingh Stadium at Jaipur on Monday.

The DC win which overshadowed a sublime century by Ajinkya Rahane, takes them to the top of the table with 14 points from 11 games just above Chennai Super Kings, who are below owing to a lower net run-rate. This was the Royals’ seventh defeat in 10 games which means the inaugural champions are all but eliminated from the tournament’s playoffs.

Chasing 192, Dhawan had to lay the foundation for the chase. The southpaw, who was flawless, not only did that, but set the right tone smashing eight boundaries and two sixes to register his fourth half-century this season. His departure to Shreyas Gopal slowly titled the momentum to the Royals, more so following the exit of captain Shreyas Iyer followed his senior team-mate in the next over after he became young Riyan Parag s maiden IPL wicket. Iyer, who was in touch good, tried to go after the bowler straightaway, but it came right off his bat s toe end and was holed out at deep midwicket by Ben Stokes to depart for just 4.

Once Pant entered at No. 4, he changed the momentum in a canter. It took a brilliant 84-run partnership for the third wicket by Prithvi Shaw and Pant to steady the innings and put DC on course for victory. Shaw, who was dropped in the sixth over by Ashton Turner, who registered a hat-trick of ducks, went on to score 42 off 39 his scratchy innings studded with four boundaries and just the solitary six.

Pant, meanwhile, who had to play mature knock, delivered and battled against the odds on the day scoring an unbeaten 78, with the help from Sherfane Rutherford. Pant smoked six boundaries and four towering sixes in his unbeaten knock that came in just 36 balls as Delhi Capitals registered yet another away win.

Shaw fell to Gopal in the 17th over, while Rutherford (11) was sent back by Dhawal Kulkarni an over later, but Pant remained solid and proved his credentials firing a six to cap off a thrilling run-chase.

For the Royals, Gopal pocketed two for 47 in his four overs, while Parag ended with figures of 1/25 in his three overs.

Earlier, after being sacked from captaincy, Ajinkya Rahane dished out a classy 58-ball century and remained unbeaten on 105, while new captain Steve Smith (50) provided the right support as the duo powered Rajasthan Royals to a challenging 191/6 in their Indian Premier League (IPL 2019) match against Delhi Capitals on Monday.

Invited to bat after DC captain Shreyas Iyer made the right move to bowl on a surface Graeme Smith reckoned was suited to chase under lights, the Royals lost the dangerous Sanju Samson in what was an absolute waste of a wicket in the second over after he was run out thanks to a major mix-up between him and Rahane. Kagiso Rabada the bowler in his followthrough made no mistake to target all three stumps as Samson, who was on a rampage in RR s previous match against Mumbai Indians, departed without facing even a delivery.

That premature departure perhaps brought the demon inside Rahane, who turned the clock back with some crisp strokeplay. He took the bowling attack to the cleaners smashing 11 boundaries and smoking three towering sixes in his unbeaten stay at the crease. Luck too played its part in Rahane s immaculate knock an innings of courage and conviction after Ishant Sharma spilled a dolly at short fine-leg when he was batting on 16.

Rahane led the charge in the 130-run partnership for the second wicket with Smith, who brought up his second successive half-century in 31 balls his eighth in the IPL but departed immediately after reaching the milestone. The former Australia captain, who clobbered eight boundaries in his 32-ball stay at the crease, fell to Axar Patel in the 14th over after he lofted it straight to Chris Morris at mid-off.

Meanwhile, Rahane, who reached his fifty in 32 balls his second of the season waded into the Delhi Capitals bowling attack even as the right kind of support failed to back him from the other end as wickets kept falling. Ashton Turner registered his third consecutive first ball ducks and went into the history books with a record that nobody would want to be proud of. Ben Stokes too failed and chipped in just 8 before he was given marching orders by Morris.

For Delhi Capitals, Rabada was the pick of the bowlers with two for 37 in his four overs, while Ishant, Axar and Morris all picked one wicket apiece.

Delhi Capitals had made one change with Nepalese spinner Sandeep Lamicchanemaking way for Morris, while Rajasthan Royals remained unchanged. 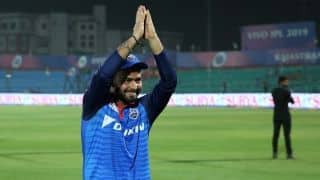