The two batsmen will meet on the field for the first time since October 2017.

The last time that Virat Kohli met Steve Smith on a cricket field was October 2017, during an ODI between India and Australia at Nagpur.

Smith was leading Australia, at the time ranked third in ODIs, and was the No 1 batsman in Test cricket. Smith, Kohli, Kane Williamson and Joe Root were viewed widely as the best four batsman in the world, across formats, with the latter three each having designs on usurping Smith from the top spot.

Then Smith was handed a 12-month ban from Cricket Australia for his role in the ball-tampering scandal and missed the 2018 IPL and all of Australia’s engagements since. At the time of his ban, Smith was the top-ranked batsman in Test cricket. But with him out of the fray and Kohli scoring runs by the bucket, the former Australia captain was toppled and the latter rose to claim the No 1 spot. (READ: One team will win, at last, but is it too late?)

In the year that Smith has been out of competitive cricket, Kohli has grabbed the No 1 ranking in Tests and ODIs and India remain at the top-ranked team in Tests while Australia have dropped to fourth in Tests and fifth in ODIs. (VIDEO: Rajasthan meet Bangalore in search of first IPL win)

On Monday, Kohli and Smith will face off for the first time since October 2017 when Rajasthan Royals host Royal Challengers Bangalore in Jaipur in game 14 of the 2019 IPL.

Neither has made a strong impact so far. Kohli has 55 runs in three innings with a best of 46 and Smith 48 in two with 28 his highest score.

Both their teams are winless in the league. RCB are eighth placed, Rajasthan one spot above them.

Rajasthan have suffered defeats to Kings XI Punjab by 14 runs, to Sunrisers Hyderabad by five wickets and Chennai Super Kings by eight runs. RCB lost to Chennai by eight wickets, to Mumbai Indians by six runs and Hyderabad by 118 runs.

A first win awaits both teams – who will get off the mark? And which batsman will dominate? 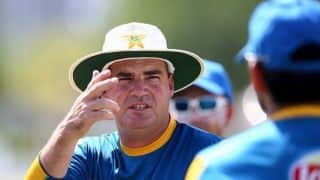