Match 45 of IPL 2019 is between Rajasthan Royals versus Sunrisers Hyderabad, in Jaipur today.

Here are the talking points ahead of RR vs SRH:

How will RR cope without Buttler, Archer?

The great IPL exodus has started. Rajasthan Royals will be hit hard as they will miss their two prized possessions in Jos Buttler, Ben Stokes and Jofra Archer who have left for England. While Stokes has failed to replicate his debut season performance, Buttler and Archer have been a reliable bet for the 2008 champions who are currently at the seventh spot in points table. Buttler is their second highest run-getter so far with three fifties while Archer is their second highest wicket-taker. Not to forget is economy of 6.76 and his efficacy in the death overs. Their absence leaves the door open for Ashton Turner despite his horror start. Will he finally deliver?

And what about SRH?

Like their opponents, SRH are also going to be hit by the absence of their overseas stars. Opener Jonny Bairstow, their second-highest run-getter so far, has also left. Though they have a replacement ready in Martin Guptill, the New Zealand opener knows he has some big shoes to fill. But there some good news for them Kane Williamson has returned after leaving for personal reasons.

Williamson has enjoyed plenty of success as an opener for SRH but then where do they fit in Guptill? Manish Pandey struck his season’s first fifty (at No.3) after being promoted in their last game. Considering Guptill’s past struggles in IPL, he might have to wait. Williamson alongside David Warner at the top makes for a more assuring pair with Pandey following at No.3. Also, SRH will have to make room for a wicketkeeper as Bairstow is no longer available which also limits the entry of Guptill.

What happened when they met before?

Sanju Samson hit the first century of the season to help SRH post 198/2 in Hyderabad. But fifties from Warner and Bairstow and handy innings lower down the order meant SRH overhauled the target with an over to spare. That win was SRH’s fourth straight against RR. The last time they lost to RR was back in 2015. Will tonight be the end of their four-year wait?

Ajinkya Rahane is 53 runs away from 5000 T20 runs. If he does that tonight, he will become the eighth India batsman to do so. On the other hand legspinner Rashid Khan is just two wickets away from 50 wickets for SRH. 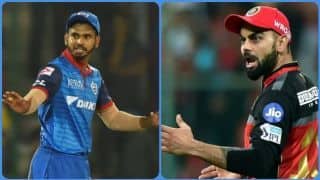 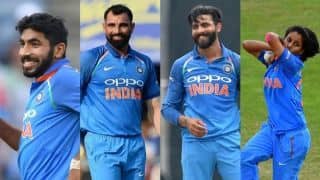