Opening batsmen of almost all the franchises have found it easy to score runs in most of the games.

Ever since the inauguration of the Indian Premier League in 2008, batsmen, and mostly openers, have found it easy to score big whether it be Kolkata Knight Riders‘ Brendon McCullum who kicked off the league in an amazing manner, playing a blistering 73-ball 158 or Shane Watson who scored an unbeaten 117 to help Chennai Super Kings win the trophy for a record third time last season.

And if one does an analysis of the ongoing edition, they will find that this season has been no different. Opening batsmen of almost all the franchises have found it easy to score runs in most of the games, irrespective of the time the matches have started.

Jonny Bairstow (445) and David Warner (611) were absolutely sensational for the Sunrisers Hyderabad as they scored the bulk of the runs for the team and single-handedly won matches. For Kings XI Punjab, Chris Gayle (444) and KL Rahul (441) have been very impressive at the top of the order, a reason why Punjab have performed well in IPL 2019 as compared to the previous editions.

Though Royal Challengers Bangalore have not had a season of their liking and are all but out of the contention of making it to the playoffs, Virat Kohli (400) and Parthiv Patel (326) have been among the runs throughout the season and have played a massive role in the four matches that they have won in this season.

For Rajasthan Royals, Jos Buttler (311) had a terrific run in the eight matches he played. Buttler, along with Ajinkya Rahane (391), laid the foundations for the Royals, whether they were setting up a total or were chasing.

Shikhar Dhawan (401) and Prithvi Shaw (262) have performed in almost all the matches for the Delhi Capitals. The duo have made full use of the Powerplays, scoring big and thus reducing the pressure on the middle order. Their strong start has enabled Delhi to be at ease while setting up targets or in chasing, a big reason why the franchise finds itself at the second spot in the points table.

However, while batsmen at the top have performed well for almost all the teams, batsmen in the middle order have been found wanting in IPL 2019. Apart from Andre Russell (406) and MS. Dhoni (314) for KKR and CSK respectively, most of the middle order batsmen have failed to deliver. On occasions when openers have not given a good start, middle order of most of the teams have struggled to deal with the pressure and the slowness of the wickets which has been there in all the grounds.

As IPL 2019 reaches its business end, all the franchises would hope their top-order batsmen continue to go all guns blazing and lay the foundation for a slam-bang finish in the remaining matches. 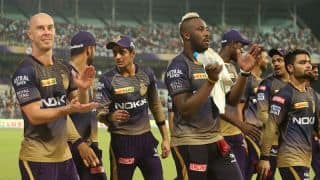 Sunrisers Hyderabad vs Kings XI Punjab, IPL 2019, LIVE streaming: Teams, time in IST and where to watch on TV and online in India