SRH are placed at the fifth spot with eight points from as many games, while KKR are a rung below with the same number of points, but a lower run-rate from nine games.

With the tournament having crossed its halfway mark, both sides will be looking to bag as many wins as possible in the race for a playoffs berth. SRH are placed at the fifth spot with eight points from as many games, while KKR are a rung below with the same number of points, but a lower run-rate from nine games.

With the bat, David Warner and Jonny Bairstow once again guided the team to a facile victory as the duo shared 66 runs for the opening wicket.

KKR, meanwhile, have looked off colour at home with their middle order not showing up and their over reliance on Andre Russell now a worry. Chasing a stiff 214 against RCB, KKR lost the first three wickets inside the powerplay with Robin Uthappa and Nitish Rana stumbling along, accumulating just 46 off 41 balls in a partnership.

KKR s bowling which has been traditionally dependent on spin, have looked far from threatening with Kuldeep Yadav going for 59 runs on Friday. On Sunday, it will be also be Rashid against Russell as the latter hasn’t had so much success against the turning ball.

In their last meeting, which was just the second match of the tournament, KKR won by six wickets with Russell smashing a 19-ball 49 chasing 182. Will Sunrisers Hyderabad avenge that defeat at home? Let s wait and watch!

Weather: Sunny with a maximum high of 39 degrees Celsius

You can also follow LIVE action of the match on CricketCountry (Sunrisers Hyderabad vs Kolkata Knight Riders: SCORECARD)

With a win under their belt and confidence oozing from all sides after a thumping defeat against CSK, Sunrisers Hyderabad may not opt to tinker much with their playing XI. However, given s Khaleel Ahmed s tendency to go for runs, they may just replace the left-arm pacer with Siddharth Kaul, who has a much better economy rate. Manish Pandey may also replace Shahbaz Nadeem with the spinner going for 24 runs in his two overs against CSK.

Although not many changes may occur in the KKR line-up, their batting line-up could do with a rejig. Shubman Gill ought to keep his No. 3 spot and Dinesh Karthik can bat below the youngster with Robin Uthappa out of touch. In the bowling department, Harry Gurney may make way for Lockie Ferguson as the former went for over 10 runs an over against RCB. 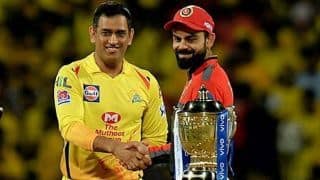