As Sunrisers defended 212 with ease, we look at certain passages of play from last night which impacted the outcome of the game.

Sunrisers Hyderabad dished out a clinical performance Monday night, one that saw them register an emphatic 45-run win over Kings XI Punjab and propel themselves to No. 4 on the IPL 2019 points-table. David Warner set the tone with a blistering 81, after which the bowlers played a crucial part. As Sunrisers defended 212 with ease, we look at certain passages of play from last night which impacted the outcome of the game.

Warner signs out with a bang

David Warner. Well, what more do you say about him? Almost 700 runs, eight half-centuries, one hundred. It s pretty much the stuff of dreams. Warner started this season of the IPL with a bang and went out with a similar explosion. Hit 81 was his eighth consecutive half-century against KXIP, another innings in which Warner was near flawless against spinners. Arshdeep Singh was taken for consecutive boundaries and R Ashwin was welcomed into his spell with a six. But it was young Mujeeb Ur Rahman who was at the receiving end of Warner s assault. He took the spinner for a six and consecutive boundaries and later, another four. It took a thick outside edge to get to his fifty, culminating into a fitting farewell for Warner, who was playing his final game of the season.

Mujeeb was at the receiving end of some severe punishment from the Sunrisers batsmen. After Warner began the onslaught, the likes of Manish Pandey and Wriddhiman Saha came to the party. The result: Mujeeb bled 66 from his four overs, the most runs conceded by a foreign player/spinner in an IPL match. Only Basil Thampi has been taken for more runs than the young Afghanistan spinner. One can also put forward a case that Mujeeb could have been managed better by his skipper. R Ashwin could have continued to make Mujeeb bowl in the middle overs than in the death, where the offspinner leaked runs at over 10 an over as compared to around 6. Mujeeb ended up conceding two sixes from Afghanistan teammate Mohammad Nabi, who later admitted to have faced no difficulty in reading the mystery spinner

KL Rahul top-scored for KXIP with a 56-ball 79, and yet, you couldn t help but feel that from the moment Chris Gayle skied Khaleel Ahmed for a catch to Pandey, KXIP were already out of it. Mayank Agarwal and Nicholas Pooran got quick starts but neither could convert it into something substantial. The other opener, KL Rahul was slow to start off as well, playing out many dot balls against the new-ball pair of Khaleel and Bhuvneshwar Kumar not the approach you require when chasing over 200 in T20.

If Mujeeb endured a match to forget, Rashid Khan s brilliance made it 2-1 in favour of Afghanistan players on Monday. Nabi had already played a vital hand with the bat scoring 20 off 10 with two sixes. And when it was his turn to bowl, the legspinner got timely strikes to ensure keep Kings XI on guard. After being drilled for a six from Agarwal, Rashid got his man the next ball, foxing him with a slower, loopy delivery. His next wicket, that of David Miller, wasn t off the best of deliveries but it was a big scalp none the less. However, when he took out Pandey off the very next ball to be on a hat-trick is when the panic erupted in the Sunrisers camp. Rashid s strikes in the middle overs ensured Sunrisers played out a perfect game and jumped to the fourth spot on the points-table. 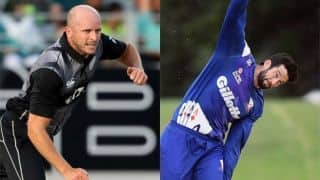