KKR began well but then lost six matches in a row to find themselves struggling to make the IPL playoffs.

In a season which promised so much, two-time winners Kolkata Knight Riders ended up with a disappointing record in IPL 2019. Take away the superb all-round performances of Andre Russell, who hammered 510 run off just 249 runs and was KKR’s leading wicket-taker with 11, and this was a season to forget.

Under the captaincy of Dinesh Karthik, KKR began well but then lost six matches in a row to find themselves struggling to make the IPL playoffs. It all came down to the final league match of the season, against Mumbai Indians, and on the day KKR combined to lose by nine wickets.

After the end of that loss, KKR assistant coach Simon Katich spoke of what was already plain to see – that all is not well inside the camp.

Beating Royal Challengers Bangalore by five wickets with five balls to spare. Once again, Russell came to Knight Riders’ rescue yet with a match-winning unbeaten 48 off 13 balls, taking his team to their third victory of IPL 2019.

In eight balls of mayhem, Russell turned a situation from which KKR needed 66 from four overs into a stunning win.

Losing to Mumbai Indians in the final match. Having beaten MI in the earlier match at Eden Gardens by a whopping margin to stay alive, KKR landed up at the Wankhede Stadium and endured their poorest game of the season.

Little went right from the time Rohit Sharma won the toss and put KKR in. Shubman Gill made nine off 16 balls, Russell bagged a golden duck, Karthik managed three from nine and Robin Uthappa – who earlier during the narrow loss to RCB made an inexplicable 9 off 20 deliveries – consumed 47 balls for his 40 runs.

Uthappa’s scratchy innings featured 24 dot balls, including a maiden over. With the likes of Rinku Singh failing too, KKR ended with 133/7 in their 20 overs. Mumbai chased it down with 23 deliveries left, and for the loss of only one wicket.

Why was Russell not batted higher? Why did it take so long for Gill to get the opening role? Why was Lockie Ferguson overlooked on tracks where pace was needed?

No clear answers from Karthik, but when Russell was prompted to speak his mind during a post-match press conference and spoke of “bad decisions” hurting KKR it needed little surmising as to what direction the team’s star performer was speaking.

Hands down, Russell. The West Indian allrounder put in some stunning performances in both victories and defeats. With a strike-rate of 204.91 and nearly 75% of his 510 runs coming between overs 16 and 20, there was no more dangerous striker of the cricket ball than Russell.

He batted too low for KKR, as evident from a few botched games, but every time Russell came out to bat he was feared. Despite a bit of a niggle, he finished as KKR s leading wicket-taker with 11.

Kuldeep Yadav. The image of KKR’s lead spinner in on his knees, with tears rolling from his eyes, after RCB’s Moeen Ali pasted him for 27 runs in five balls, will linger.

Kuldeep played nine matches from which he managed four wickets, while conceding runs at 8.66 an over. He finished with a bowling average of 71.50 per wicket, which is the worst he’s ever performed in an IPL season. After going for 58 runs in four overs against RCB, Kuldeep was dropped and did not play a game again.

Was it fatigue after a full years of Test, ODI and T20I cricket for India? The man himself has not spoken, but from the evidence of matches he played it was clear that Kuldeep bowled too many hit-me deliveries. A couple dropped catches hurt his confidence, but truth be told this was a shadow of the Kuldeep that fans of Indian cricket have grown used to seeing over the past year.

On paper, KKR’s bowling had cracks even before the season began. Losing Shivam Mavi and Anrich Nortje to injury was a further blow. The lack of firepower in the pace department was a sore spot, with the likes of Prasidh Krishna just not good enough, Kuldeep wholly ineffective, Sunil Narine not anywhere near his full strength as bowler and opener, and the overseas pair of Ferguson and Harry Gurney inconsistent.

Barring Russell, Chris Lynn, Gill and Nitish Rana, the batting did not stand up. A strong couple of matches early on put the franchise in a position from where they could hope to stake claim for a playoffs spot, but those six consecutive defeats proved irreparable. 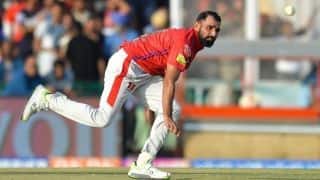