We sift through the numbers and results to pick the 11 most impactful players of the IPL's league phase.

The league stage of IPL 2019 has ended and the top four teams on the points table have been decided, with the playoffs starting on Tuesday between table-toppers Mumbai Indians and defending champions Chennai Super Kings in Chennai.

A total of 55 matches were held during the league stage of IPL 2019, with many overseas and Indian cricketers dominating with bat and ball.

Before the start of the playoffs, we at CricketCountry chose our best 11 of the league stage.

During his comeback to the IPL after serving his sentence for ball-tampering in South Africa last year, Warner amassed 692 runs at an average of 69.2 and strike-rate of 143.86 for Sunrisers Hyderabad before returning home. Warner s 81 off 56 balls in Sunrisers big win over Kings XI Punjab was his ninth 50-plus score of the season.

The Australian was a unanimous vote by our staffers, polling 100% of the votes.

Dhawan is the leading run-getter for Delhi Capitals this season, which has been a big factor in the rechristened franchise making it to the IPL playoffs after six seasons. He has five half-centuries, which includes a career-best 97 not out to steer Delhi to victory over Kolkata Knight Riders for the second time this year.

Dhawan was a key figure in Delhi’s resurgence after a brief slump, scoring three consecutive half-centuries after that 97.

The left-hander beat Jonny Bairstow and KL Rahul to our best XI of the league stage, with 50% of the votes.

Joining Dhawan is his Delhi skipper Iyer, who slots in at No 3 in his this list. Iyer won 66% of the votes to beat RCB skipper Virat Kohli, who scored more runs (464) but was inconsistent.

Also tipping the scales in favour of Iyer was the fact that he was leading Delhi, who had not reached the IPL playoffs since 2012, and the fact that they were No 1 on the table for aa brief while. RCB, meanwhile, lost their opening six matches with Kohli’s captaincy widely criticised.

Russell was KKR s talisman this season, performing powerfully in victories and defeats. With a strike-rate of 204.91 and nearly 75% of his 510 runs coming between overs 16 and 20, there was no more dangerous striker of the cricket ball.

He batted too low for KKR, as evident from a few botched games, but every time Russell came out to bat he was feared. Despite a bit of a niggle, he finished as KKR’s leading wicket-taker with 11.

The two matches he missed with a stiff back, CSK lost. What is it about Dhoni in the IPL?

His stamp was all over CSK this season, be it with the bat, behind stumps or as a tactician. In the IPL 2019 opener, Dhoni s judgement of the MA Chidambaram surface was a game-changer, for he played four spinners and gave the ball to Harbhajan Singh upfront. The result was that Royal Challengers Bangalore were bowled out for 70.

Against Rajasthan Royals, Dhoni revived CSK from 27/3 and smashed his highest IPL score of 75 not out from 46 balls, while scoring 35 of the 60 runs CSK managed in their final three overs. Against KXIP, he hit 37* off 23 balls to help CSK to 160/3, which proved more than enough for victory. In the reverse match versus RR, Dhoni made 58 off 43 balls before he was dismissed in the last over of a thriller, which also saw him lose his cool and walk onto the field.

When he returned from injury, Dhoni made 44* off 22 balls as CSK defeated Mumbai Indians to reclaim top spot.

A unanimous chose to keep wicket and lead our IPL XI of the league stage.

If there has been one consistent performer for MI, it is Pandya. The allrounder has been in strong form with 373 runs in 13 innings, with 28 sixes and 26 fours. His bowling has not been as good as Pandya or MI would have liked, but he ended the league stage with 14 wickets. Some electric fielding have added to his all-round value.

Pandya tallied 83% of the votes to make this IPL XI.

The Karnataka legspinning allrounder was one of the few bright spots for Rajasthan Royals in IPL 2019. Gopal claimed 20 wickets to finish the league stage as the third most successful bowler.

His best came against RCB, first when he took exceptional figures of 4-1-12-3 including the wickets of Kohli, AB de Villiers and Hetmyer, and then when he claimed a hat-trick in the washout as the league stage drew to a close.

Picked in every match CSK played, Chahar had an impact during the first half of the season to keep CSK on top of the table and earn himself a spot with India’s touring World Cup squad as a nets bowler. His accuracy up front was very impressive, and Chahar bowled a record 20 dot balls during his match-winning spell of 3/20 against KKR in Chennai.

In a team reliant on spin and Dwayne Bravo, Chahar has gone about his business in the IPL very efficiently.

Rabada is the holder of the Purple Cap for most wickets in IPL 2019, a record that he could still have when the league ends despite being ruled out with injury.

The 23-year-old played a starring role in Delhi Capitals’ resurgence as they qualified for the IPL playoffs for the first time in six years. He was quick, accurate – remember the Super Over win over KKR? – and consistent, which was massive for his franchise. Rabada claimed 4/21 to down RCB and his 4/22 to help beat SRH was another excellent performance.

It was no surprise that Rababa polled 100% of the votes.

The best death-overs bowler, hands down. Bumrah’s yorkers and accuracy this season have been pivotal to MI leading the points table. Barring two matches, Bumrah was nagging with his accuracy and very tough to score off.

Early in the season, Bumrah claimed 3/20 in the narrow win over Bangalore which is testament to his death-overs skill. After being hit by Kohli for three fours in his first over, Bumrah came back to concede eight runs in his last three overs while taking three wickets. Against CSK in Chennai, he took 2/10 in three overs and then, after going wicketless in the big loss to KKR, Bumrah bounced back with two successful matches versus SRH and KKR as MI won two in a row to top the table.

The sight of Tahir running around the cricket field, arms outstretched and with a huge roar on his face, has become common this IPL. Picked by CSK in every match, the South Africa legspinner is second on the wickets’ table with 21 at a superb economy rate of 6.50 – the lowest after Rashid Khan’s 6.46.

Tahir, 40, set tone for his successful IPL in the early stage of the tournament with six wickets in three games, including IPL-best figures of 4/27, to help CSK stay on top.

It did not take too long for Tahir to outdo those figures of 4/27 when he fetched himself 4/12 as Delhi Capitals were bowled out for 99 in Chennai. 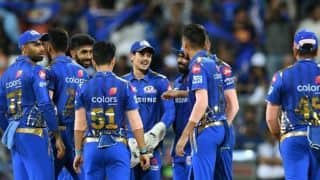 We didn't want to be predictable against KKR: Mahela Jayawardene