IPL 2019 saw some terrific catches which added to the frenzy of an electric season.

The 12th season of the IPL came to an end on Sunday as Mumbai Indians beat Chennai Super Kings by one run to win their record fourth IPL title.

In IPL 2019, there were many batting, bowling and fielding highlights for fans to cherish. On that note, we present the five best catches of IPL 2019.

When Mumbai Indians first met Chennai Super Kings this season, they won by 37 runs. Chasing 171, CSK struggled to forge partnerships and one of the big wickets to fall was that of Suresh Raina who slashed a ball from outside off stump over the point region and was stunningly taken by Kieron Pollard not far from the boundary.

Pollard had to watch the ball travel fast, but somehow timed his jump to perfection. His right arm fully outstretched, with the ball over his head and the pace pushing him backwards, Pollard grabbed the ball and didn’t let it fall as he fell backwards.

For this outstanding leaping catch, Pollard won the Perfect Catch of the Season Award after Sunday’s IPL final.

The Australian batsman chipped a ball from Sam Curran over mid-off. Rahul kept his eyes on the ball as he ran across the field to his left from long-off, timed his dive excellently and cupped the ball with two hands as he hit the grass.

One of the best fielders in the world, particularly when it comes to catches in the deep, CSK’s Faf du Plessis held some fine catches in IPL 2019.

The best came in CSK’s match against RCB in Bangalore, when Marcus Stoinis slogged at Imran Tahir but got a leading edge that flew high and down to long-off where du Plessis ran backwards and did not lose sight of the ball. But as it dipped on him, he realised that he was going to overbalance and fall across the boundary line, so as he got the ball du Plessis threw it to his right and Dhruv Shorey held on.

It was a split-second reaction from du Plessis, and boy did he nail it.

(READ: Imran Tahir sets spin record for most wickets in an IPL season)

Here’s what happened. Quinton de Kock went after a short ball and got a top edge that flew towards fine leg. As the ball swirled up, Dinesh Karthik ran nearly towards the fine leg fielder and dived forward to hold an exceptional catch. First of all, the distance he had to cover was no less than 30 meters. Second, to run backward and not lose sight of the ball took some doing. And third, to hold onto the ball as he dived forward. All in all, a fantastic effort from Karthik.

Colin Ingram, Delhi Capital’s South African import, held a superb boundary catch that he parried back into the field of play. Chris Gayle went back and smashed a short ball over mid-on. The ball looked destined for six but then, just inside the boundary, Ingram held onto the catch but lost balance as he fell backwards. In an instant, he threw the ball back inside the field of play with his right hand even as he lost balance and fell over. It was a terrific response, for Axar Patel did not have to move at all as he collected Ingram’s pinpoint lob.

Which of these five catches is your favourite? 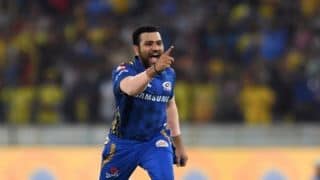 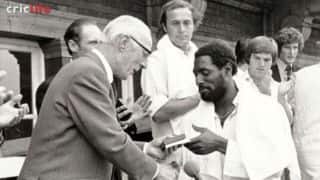