These three teams have maintained a clear distance from the rest of lot in the points table.

All the teams have now completed nine of their 14 matches. Unlike previous season where the qualifiers spot has been a cut-throat race, this time around it’s a race at the second half of the points table. Mumbai Indians (MI), Royal Challengers Bangalore (RCB) have bleak chances needing to win all their matches, Sunrisers Hyderabad (SRH) and Kolkata Knight Riders (KKR) have a better chance of staking claim for playoffs while Delhi Daredevils are working hard to avoid a bottom place finish.

Yet what has been the interesting aspect is the way the top three have played. While they have won consistently, the gap between them and the rest can easily allow complacency to creep in. When you are winning it’s simple logic that there are certain areas where they have done consistently well than other. Below are some of the strategies that have been key to their success.

a) Managing their Indian resource

Seldom have we seen any team succeeding only on the strength of exceptional overseas players. Glenn Maxwell‘s blitzkriegs wouldn’t have been as impressive if the Indian bowlers weren’t effective. All the three teams have been blessed with their Indian players gelling well. Chennai Super Kings (CSK), have traditionally had the strongest of all with majority of players part of the Indian team (Ravindra Jadeja, Ravichandran Ashwin, MS Dhoni and Suresh Raina). Whereas Kings XI Punjab and Rajasthan Royals (RR) have unearthed gems in young Indian talent. However, the other teams are struggling to ensure their Indian players perform consistently. Sunrisers are perhaps the only team with Lokesh Rahul, Amit Mishra, Karn Sharma and Bhuvneshwar Kumar doing well. But CSK, KXIP and RR have managed their Indian resource well and have stuck to their identities.

All these teams have quickly found the right combination. Dhoni has been traditionally known to stick with his playing XI for India and the same reflects with CSK. Whereas KXIP’s playing XI has remained consistent thanks to the wins that have come by and RR have experimented and finally got down to their 12-13 players with whom they can shuffle around.

c) Skilled bowling to work around on all pitches

CSK and RR have quality spinners who don’t necessarily require turners. Ashwin, Jadeja are skilled enough. Pravin Tambe has been extremely tough to get away with. When it comes to fast bowling, Ishwar Pandey and Mohit Sharma have been accurate with the former relying on swing. Sandeep Sharma’s swing has stunned almost every opposition, Royals have done well with Kane Richardson and Rajat Bhatia. In comparison, the other teams have failed to get their bowling combinations right. And even if they did, they failed to deliver when it mattered. RCB is a classic example. All of their regular bowlers are among the wickets, but when it came to sticking to the basics, they faltered and did so badly against RR.

This is one area which has ensured that close matches have fallen in their bag. Dhoni has finished the innings whenever necessary while most of the times, Dwayne Smith and Brendon McCullum have been excellent finishers. RR have been brilliant with James Faulkner, Steve Smith while KXIP are flying high with David Miller, George Bailey, yet Maxwell has stolen the match even before the death overs begin. These players have closed out the chase while many other teams have squandered opportunities when they were closing in on a run-chase. RCB and KKR have been guilty of committing this mistake on more than one occasion.

Moving ahead, it’s unlikely that the other teams are going to outclass these three in the above mentioned areas which makes things very clear this season. Four of the five teams will be scrambling to sneak in to the fourth qualifier spot. 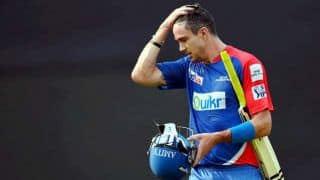