Kolkata hold all the aces with just 13 matches to go in the IPL 7 group stage.

With 13 more matches to go, the battle for the fourth playoffs spot is getting intense with Kolkata Knight Riders in the lead. Abhijit Banare looks at the possible equations for teams to get through to playoffs.

Kings XI Punjab: The safest team in the competition after Delhi Daredevils! With a comprehensive win over Delhi, they managed to secure their place at the top and are through to the playoffs. They lost against Mumbai Indians but it won’t bother them much. With two matches to go, they might either opt to give their bench strength some opportunity or come with full force to cement the top position.

Chennai Super Kings: After Sunrisers Hyderabad defeated Royal Challengers Bangalore, Chennai are through to the playoffs with 16 points. So the loss to Kolkata Knight Riders won’t bother them much, except that the race now will be to grab the second spot and gain that extra chance in the playoffs.

Rajasthan Royals: First of all, they have the net run-rate in their favour. They looked complacent in their loss against Mumbai without their key players, but Royals are very much secure in the race. It’s only for the next three teams below them who have to slug it out. They play Punjab  on May 22 and against Mumbai on May 25.  Even if they lose against Punjab, Royals will be playing the last match of the league which means if they fall back in the net run-rate, they walk in to the match against Mumbai knowing what they want. But it would require bizarre results to unseat Royals on net run-rate.

Kolkata Knight Riders: After Sunrisers Hyderabad kept the points table interesting, Kolkata deflated it  by registering a comprehensive victory over Chennai. From hereon, it will be  Kolkata’s to lose a playoff than anything else. Compared to the teams scrambling below them, their net run-rate is in the positive and they have two more matches ahead. For Kokata to confirm qualification, they have to win one of their two matches.

Before we progress to the equations for teams below, the first critical criteria for having any playoff hopes is to see that Kolkata don’t win any of their matches from hereon. Their remaining two matches are against Bangalore and Hyderabad.

Royal Challengers Bangalore: They have slipped to sixth in the points table but the gap between Bangalore, Hyderabad and Mumbai is very narrow —  (-0.156, -0.263, -0.280) to be precise. Bangalore and the two teams that follow have must-win situations. But the match could very well be sealed on May 22, when KKR and RCB face-off. For the sake of rest of the teams, RCB will have to defeat KKR to harbour any hopes of qualifying and hope SRH repeats the same.

Sunrisers Hyderabad: They have truly spiced up the tournament with a win against RCB but it would once again require net run-rate to come in play. If KKR lose to RCB on May 22, SRH will still be in contention by going past the mighty CSK and then defeating KKR again.

Mumbai Indians: Well, the equations have changed since the last match. Mumbai not only won by 25 runs but ensured that they scored heavily against Rajasthan Royals. Placed fifth in the points table, Mumbai would be the most dependent on the numerous complicated equations of other teams to fall in their favour, and well they also need to win the remaining two matches in the first place to even think of net run-rate. In any case if things do go in their favour, Mumbai will be at an advantage as they play the last match of the league phase. But there’s still some time before they get there. They will be hungry to beat Delhi t home on May 23.

There can indeed be a situation where KKR, SRH, RCB, MI all end on 14 points by the end of the league phase but KKR are ahead in net run-rate. As mentioned earlier, KKR are the only team who have things in their control for a playoff spot.

Delhi Daredevils: Undoubtedly the safest team at the moment! Even if they manage to upset the other teams in their remaining matches, there is no chance of qualifying for playoffs.

The above article has been updated after Mumbai Indians defeated Kings XI Punjab on May 21, 2014. 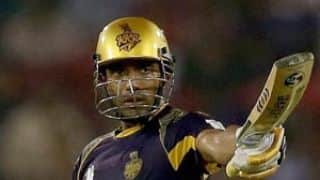