Defending Champions Mumbai Indians (MI) search for their first win in the Indian Premier League (IPL) 2014 on their home turf against the Kings XI Punjab (KXIP). Astrologer Pandit Anil Chaubey makes his predictions on he match.

It has been a torrid season for Mumbai Indians in the IPL 2014 as they failed to register any win in the first lef of the tournament in UAE. They lost all their five matches. As they look to make a fresh start on their home turf, Wankhede Stadium, up against them are the in-form team who have won all their five matches in UAE — Kings XI Punjab. It’s an uphill task for Mumbai against the likes of their former teammates Mitchell Johnson and the explosive Glenn Maxwell.

Toss: Mumbai are likely to win the toss and elect to bat. Unlike in previous matches where they opted to chase a score, batting first might reduce the burden on the misfiring batting line-up.

Key Players:   Mumbai’s key players are likely to make their presence felt. Kieron Pollard, who stroked a breezy 78 will play well. Skipper Rohit Sharma too will have a good outing. Veteran Michael Hussey, who was dropped for Ben Dunk is likely to return and expected to do well. Left-arm spinner Pragyan Ojha will have a fruitful day with the ball. Whereas for Punjab, Glenn Maxwell will continue to pose a threat and skipper George Bailey will be impressive at the Wankhede. Punjab look set to dominate Mumbai’s strike bowler Lasith Malinga whereas Punjab’s opener Virender Sehwag and keeper Wriddhiman Saha might have an ordinary outing in the field.

Who will win: Batting first, MI are likely to score anywhere between 145-160 for six whereas, Punjab could be restricted to maximum of 145 for six. 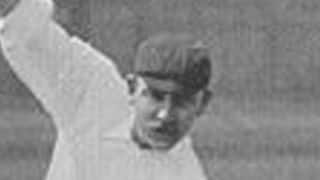 Jack Hearne: A great medium-pacer, fourth on the all-time list of First-Class wickets 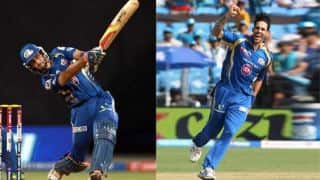