The Indian Premier League (IPL) 2014 has finally moved away from the group phase to the playoffs. Kings XI Punjab (KXIP) face Kolkata Knight Riders (KKR) in the IPL 7 Qualifier 1 match at Eden Gardens on May 27. A victory will ensure progress to the final and a loss will be accompanied by a match in Qualifier 2. Shrikant Shankar highlights some of the key battles that could prove decisive.

Virender Sehwag has not lit up the Indian Premier League (IPL) 2014 with his fireworks, but has been consistent. The Kings XI Punjab (KXIP) opener has scored 324 runs in 14 matches with a strike-rate of 132.78. This is not Sehwag of old, but he still provides some ammunition at the top of the order. His recent scores have been on the lower side and will be tested by Morne Morkel. The Kolkata Knight Riders (KKR) fast bowler has ensured his place in the line-up, while keeping tearaway Pat Cummins on the bench. Morne has 10 wickets in 10 matches and has the ability to get extra bounce, even on a slwo Eden Gardens track. Morkel also angles it into a right-hander and doesn’t give much room for a batsman to free his arms

Undoubtedly the player of the tournament so far, Glenn Maxwell has 533 runs in 13 matches at a humongous strike-rate of 191.72. He has scored four half-centuries with a highest of 95 and an average of 41.00. He will be up against the best bowler of the tournament in Sunil Narine. The West Indies spinner has 20 wickets in 14 matches with an economy-rate of 5.91. He has taken two four-wicket hauls as well. Both Maxwell and Narine have incredible figures in their respective batting and bowling disciplines. The one who triumphs in this battle, could win the match for his team.

David Miller has had an excellent IPL 2014 campaign, but has been severely overshadowed by Maxwell’s exploits. Maxwell bats at No 3 or No 4. Miller bats at No 5 or No 6. He has not faced as many opportunities to bat as Maxwell, but Miller has made the most of his time at the crease. The South African has scored 399 runs in 13 matches with three half-centuries. His strike-rate is 149.43. His highest score is 66. Umesh Yadav will be given the task to get Miller out early. Umesh is a skiddy bowler and can get the ball to leave left-handers. He can force Miller into playing early at the ball and get his wicket. Umesh has had a stop-start series taking seven wickets in 10 matches, but has the ability to get wickets in cluster. That is enough in Twenty20 (T20) cricket.

Of all the Mumbai Indians players to have joined Punjab in IPL 2014, Mitchell Johnson was expected to provide the biggest impact. But the left-arm fast bowler has not lived up to his lofty hype. In reality, Johnson has done well by taking 12 wickets in 11 matches, but such is his current status in international cricket that it seems only average. But he is world-class and is probably the only fast bowler in IPL 2014 who can run through a batting line-up. He will first have to dismiss Robin Uthappa — the leading run-scorer this season. In his last nine innings, Uthappa’s lowest score has been 40. He has scored four half-centuries in that process. Uthappa has 613 runs in 14 matches with a strike-rate of 137.44. He has an average of 47.15 and seems destined to give Maxwell a run for the money in the race for the Purple Cap.

This is an interesting battle. Akshar Patel has quietly gone about his business and taken 14 wickets in as many games. The left-arm spinner also has a decent economy-rate of 6.48. He uses his height to good effect and gets that slight turn away from the right-handers. But bowling to someone like Yusuf Pathan can be an intimidating prospect. The Baroda batsman demonstrated his brute force against Sunrisers Hyderabad in Kolkata’s last league match in IPL 7. They needed to get to their target quickly to seal second spot in the Points Table. Yusuf hammered 22-ball 72 with five fours and seven sixes. If he is in this sort of form, then there are very few bowlers in world cricket, who can stop him. Akshar will hope for Yusuf to throw his wicket in search of getting the quick runs.

The right-arm swing bowler did not play Punjab’s last match against Delhi Daredevils, but should be expected to take the field on Tuesday. He bowls a fine away-swinger to the left-handers and gets early breakthroughs. He has 17 wickets in 10 matches and can prove difficult to score against, especially in the early overs. Gautam Gambhir will have his hands full trying to negotiate the initial phase of the Kolkata innings. The captain began IPL 7 with three ducks and then one run. But he changed his form to score the big runs. Although he looks in good touch with the bat, Gambhir’s form recently has dropped. He has been essential for Kolkata to progress to the Qualifier 1 on the back of seven straight wins. But Gambhir will have to play a captain’s knock to help his team enter the IPL 2014 final. 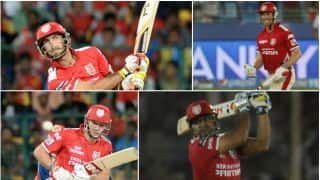