Faulkner was once again involved in a sensational chase; Smith shinesunder pressure.

In the Indian Premier League (IPL) 2014 game played between Royal Challengers Bangalore (RCB) and Rajasthan Royals (RR), James Faulkner and Steven Smith turned the game on its head by smashing the opposition attack to shreds. Bharath Ramaraj looks back at the thrill-a-minute partnership.

As the cliché goes, cricket is a game full of glorious uncertainties. When Royal Challengers Bangalore were bestriding Rajasthan Royals in the IPL 2014 game played at Bangalore, not many would have expected Rajasthan to chart a Houdini act and snatch the game away from the very grasp of their opponent. However, Rajasthan’s duo of James Faulkner and Steven Smith showcased unquenchable self-belief and breathtaking power-hitting to win them the game from the realms of impossibility.

There was nothing more than a tiny window of opportunity when Faulkner joined Smith at the crease. During the last six overs of the match, they needed 83 runs to win. However, they had a singular vision to chase down the target and in the end were successful in their endeavour. During those heart-pounding moments of the game when you expect batsmen to crumble, the duo showed nerves of steel to script a memorable victory.

It was Smith, who took the mantle of trying to up the ante. In the 15th over of the match, he smoked Varun Aaron for 16 runs. Then with 65 runs needed in four overs, it was the time to go for the jugular. To win a game with the required run-rate a touch over 16, you need most of the shots to come off and for Rajasthan’s point of view, it did happen. Faulkner even tried a desperate slog off Mitchell Starc, and it raced to the boundary boards of a thick outside edge. Starc was certainly rattled by the fearless approach of Faulkner. The penultimate ball of the 16th over of the match was right in the zone for Faulkner to help himself for another towering six over mid-wicket region.

As Bangalore’s home fans chomped their nails, Rajasthan’s sparkling duo of Faulkner and Smith akin to turbo charged engines continued to explore the nook and cranny of the ground. Smith smashed the erratic Ashok Dinda for 23 runs, followed by Faulkner giving finishing touches to take Rajasthan to a monumental victory. Both had the chutzpah to keep playing lofted strokes with gay abandon. In fact, the sheer willpower on view left everyone gasping for breath.

This isn’t the first time that Faulkner has pulled off a remarkable win with his coup de main. When Australia visited India to play a One-Day International (ODI) in October last year, he did something similar. In the game played at Mohali, Australia required 44 runs off 18 balls and Faulkner smashed Ishant Sharma for 30 runs, and Australia tasted the  success of glory.  A few months later, he engineered Australia’s triumph at the Gabba, Brisbane against England. With the game slipping away from Australia’s grasp, Faulkner washed away the challenge with aplomb by single-handedly taking them to a win. His pertinacious knock in a cauldron of bubbling tensions was met with applause and appreciation.

Coming back to the IPL 7 match played between Bangalore and Rajasthan, it has to be remembered that  the track was a batting paradise and Bangalore’s bowlers lost the plot during the final overs of the game. They seemed to be lost for ideas. For instance, why couldn’t have one of the right-arm pacers tried to bowl from around the wicket to create a different angle? However, Faulkner and Smith deserve full credit for their  equanimity and fearless courage in times of crisis. 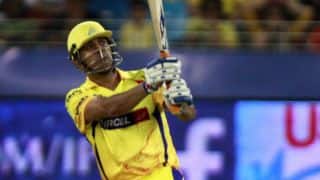 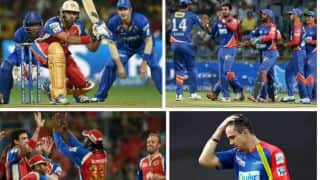