Indian Premier League (IPL) anchor Samir Kochhar has been fined 10% of his anchoring fee, for not praising the ongoing T20 enough times in a minute during the Extraaa Innings show.

Indian Premier League (IPL) anchor Samir Kochhar has been fined 10% of his anchoring fee, for not praising the ongoing T20 enough times in a minute during the Extraaa Innings show. The announcement was made by IPL governing council chairman Rajeev Shukla, after Kochhar failed to maintain the requisite rate of IPL praises per minute in a particular episode of Extraaa Innings.

Kochhar, who pleaded guilty to the level-4 offence, agreed that he got carried away and fell short of praise. “I’ve been doing this for years now; anchoring a discussion that is neither entertaining nor intellectually enriching. And on that ill-fated day, it so happened that Shoaib Akhtar was actually discussing some sensible cricket strategies. That felt like an oasis in a desert. It was such a remarkable departure from the banal norm that I was enraptured and forgot to throw in the required tributes to IPL for a while. Since the people on the IPL governing council are among the few who can watch and tolerate the show, I was caught red-handed,” Kochhar explained.

Kochhar said that he has vowed not to repeat the offence again. “I’ve learnt my lesson. Hereon, even if we get someone as legendary as Sachin Tendulkar or Rahul Dravid to the studio, I promise I will cut them short and get back to saying stuff like ‘But you know, once again, THIS…is what the IPL is about,’ and follow it up with ‘This is exactly why the IPL is so loved. It’s such a unique, entertaining package of cricket, entertainment and you won’t find an explosive combo like this anywhere else in the world. Right?’ and then throw the ball back to the studio guest’s court so that he will have no option but to agree and praise the IPL himself,” the IPL anchor said.

Kochhar, however, added that he finds it extraordinarily difficult to maintain the IPL praise rate per minute with Navjot Singh Sidhu. “Phew! With him, it’s a nightmare. I’ve to be all ears looking for millisecond – nanosecond gaps when he speaks, so that I can pounce on them and inject my punchline, ‘Well, clearly, THIS …is what the IPL is about, right, Sherry pa?’ and I then leave it to him to lift the IPL to the skies,” Kochhar added. 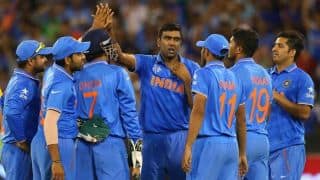