The problem with a tournament this long is that a cricketer is likely to break down sooner or later.

Indian Premier League (IPL) is one of the most sought-after tournaments of the cricket calendar. Cricketers from around the world converge in India to participate in one of the richest cricket tournaments — in terms of both talent and moolah. Sometimes fierce and almost always exciting, IPL is an action-packed series that never fails to entertain the audience around the globe. However, Sudatta Mukherjee feels that the IPL schedule is too stretched and needs to be condensed. IPL 2015 Highest run-scorer: List of best batsmen in IPL 8

Indian Premier League (IPL) 2015 edition started on April 8 and the final is scheduled to be on May 24 at Eden Gardens, Kolkata. Over 46 days, 60 Twenty20 (T20) matches will be played, making it the longest tournament this year, three days longer than even ICC Cricket World Cup 2015. IPL 2015 started after the conclusion of the World Cup. India had toured Australia before the World Cup (the tournament can be looked as an extended part of the tour), and India will tour Bangladesh after IPL. IPL 2015 Most 6s and 4s: List of most dangerous batsmen in IPL 8

IPL is a nonstop event, spanned over two months. For two months cricketers have to travel all over the country (and India is a big country), and play to a tight schedule. During the World Cup Australian coach Darren Lehmann expressed concern that the tournament is too long and can be condensed. The World Cup was spread over 43 days. IPL is three days longer. IPL 2015 Highest wicket-taker: List of best bowlers in IPL 8

The problem with a tournament this long is that a cricketer is likely to break down sooner or later. With international duties preceding and succeeding IPL, there will be an inevitable dip in their personal performances too. Glenn Maxwell’s case is a perfect example.

A tournament as long as IPL can be monotonous for cricket fans. There will obviously be more attraction for the latter half of the matches (when qualification for playoffs will come into play) than the initial games. IPL 2015 Leading fielders: List of Best fielders in IPL 8

IPL gives the teams ample opportunities to fight back after starting the season on a low note. As a result, the competitiveness and neck-to-neck battle of the tournament is minimal. For example, Mumbai Indians (MI) lost five matches in IPL 2014 before their first victory in their sixth. They then went on to make it to the final four. IPL 2015 most dismissals by wicketkeeper: List of best wicketkeeper in IPL 8

It is good that the teams always have a chance to bounce back and fight. However, cricket — or any sport — is supposed to be energetic, entertaining, and exciting. The rivalry should be incessant and intense. The long schedule leaves no room for that, as the teams always know that they have the chance to play it easy initially and bounce back later or play it tough and register the eliminator berth and relax ahead of the knockouts. There is no continuous do-or-die feeling. Even if there is any, it tends to fizzle out. IPL 2015 Points Table & Team Standings

There are eight IPL teams and they can be easily divided into two groups. Teams can play each other. Even if they play home and away matches (the way they do now), there will be a total of 24 group matches followed by the four playoff matches. In all there will be 28 matches; they can be spanned over just a month, making the contest more exciting. Right now every side plays 14 league matches; once split into groups, they will play six league matches each, thus reducing the stress levels. IPL 2015 schedule: IPL 8 match time table with venue details

Teams can be divided into the two groups just like UEFA Champions League draw; we know how thrilling that can be. With another month to go for the cash-rich league to conclude and plenty of time for the teams to bounce back, one wonders — was the first month of IPL as exciting as the second half will be? Was it even relevant? Indian Premier League (IPL) 2015: Complete coverage 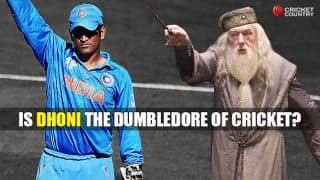