April 19, 2008 was only the second day in the history of the Indian Premier League (IPL) and Michael Hussey announced his arrival with a century that put the game out of Kings XI Punjab’s reach. Back-to-back hundreds on successive days — following Brendon McCullum’s brilliance on the opening day — meant the IPL was off to a flyer. 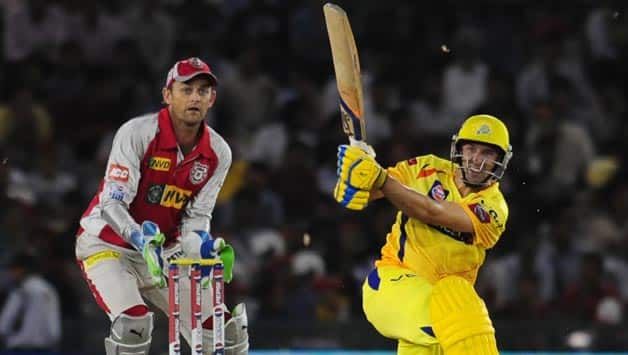 April 19, 2008 was only the second day in the history of the Indian Premier League (IPL) and Michael Hussey announced his arrival with a century that put the game out of Kings XI Punjab’s reach. Back-to-back hundreds on successive days — following Brendon McCullum’s brilliance on the opening day — meant the IPL was off to a flyer.

Mahendra Singh Dhoni won the toss for Chennai Super Kings and elected to bat on a good wicket at Mohali. For the first time, Indian fans were seeing Brett Lee bowling to his Australian teammate Matthew Hayden. It was Lee’s thunderous pace against Hayden’s aggression. The southpaw did not take time to take on Lee as he walked down the wicket and carted him through mid-wicket. In the second over, Shanthakumaran Sreesanth was earmarked for some special treatment by Parthiv Patel.

However, Patel was dismissed in the third over and in-walked Michael Hussey to join Hayden. Lee now had to contend with two of his Australian teammates. One normally doesn’t expect Hussey to take too many chances, but he was there to show that he could be effective in the shortest format as well. His first boundary was the most un-Hussey-like shot as he charged to Sreesanth and lofted him over the covers for four.

Hussey now took on Lee’s thunderbolts. He essayed a trademark cover-drive for four and dispatched the next ball through the leg-side for another four.

Chennai lost Hayden and Dhoni in quick succession, but Hussey sustained his charge. Though he took risks, Hussey was in complete control of the job at hand. His first six came in the ninth over —  over mid-wicket.

Punjab captain, Yuvraj Singh tried everything to get the better of Hussey, but the Australian was in the zone. Leg-spinner Piyush Chawla was welcomed into the attack with a huge six over long-on. This time it was a classical shot as Hussey danced down the track, got to the pitch of the ball and lofted it into the stands. Karan Goel’s gentle off-breaks were also given the same treatment as Hussey raced to his fifty off 31 balls.

The bowlers had little or no margin for error as Hussey punished anything on a length or in his half. He shifted gears after his 50. Wilkin Mota was smashed for two fours and a six as the platform was set for the slog overs.

The mid-wicket boundary was peppered with big hits as Hussey targeted it numerous times. Even the more established bowlers were hit with nonchalant ease. Though the milestone was in sight, he didn’t slow down. A few big hits took him to 99 as the crowds waited in anticipation.

Hussey got to the three figure with a single. His last fifty had taken him only 19 deliveries and his 100 had come off 50 balls. McCullum had taken 53 balls the previous evening. With little under two overs to go, Chennai were already past 200. However, Subramaniam Badrinath took a cue from Hussey and stole the limelight in the last two overs as Chennai added 40 more to their total. Hussey raced to 116 off 54 balls (eight fours and nine sixes).

Chasing 240, Punjab put in a spirited effort with James Hopes and Kumar Sangakkara scripting aggressive fifties. However, the mountain was too tall to climb and they fell short by 33 runs.

Five years on, Hussey remains an integral part of the Chennai setup even after his international retirement. They have trusted him to deliver and now depend on him to open the batting. Mr Cricket is also CSK’s Mr Dependable.

Man of the match: Michael Hussey