Kevin O'Brien and Max Sorensen have bowled poorly for Ireland.

Ireland have played four matches at the ICC Cricket World Cup 2015 and have won three. Ireland have exceeded 300-plus twice and have chased 270-plus runs twice. However, bowling has been a big headache for Ireland; they would like to overcome the weakness in their game against India. Sudatta Mukherjee writes about Ireland’s persistent bowling issues and how they can tackle India.

Ireland played Zimbabwe in their previous ICC Cricket World Cup 2015 match at Hobart. They put up a target of 332 for Zimbabwe. However, Zimbabwe almost won the match, taking things to the last over before being bowled out for 326. It was one of those days when both matches (the other being Pakistan vs South Africa) went down to the wire. Prior to that, Ireland had played South Africa at Canberra. Riding on Hashim Amla’s massive 159 South Africa put up a huge target of 412. Ireland did put up a fighting spirit before losing by 201 runs.

However, this also depicts the weak link in Ireland’s bowling department. In the first match, Ireland let West Indies score 304; in the second match UAE scored 278; in the third, South Africa scored a massive 411 without AB de Villiers’ help. In the last, despite scoring 331 batting first, Ireland’s bowlers almost gave away the match to Zimbabwe.

Let us see the top seven bowlers used by Ireland in the last four matches.

Apart from Alex Cusack, who played only two matches and picked up four wickets in the last match against Zimbabwe, all Irish bowlers have performed below par. Kevin O’Brien, with an economy rate of 9.60, has (for some mysterious reason) been used for bowling in death overs. Following are Kevin’s statistics in from the death overs. ICC Cricket World Cup 2015: SCHEDULE & MATCH DETAILS

He also has not been impressive in the batting Powerplay. Then there is Max Sorensen. He has opened the bowling with John Mooney in the three matches that he has played. He has been very costly against South Africa, giving away 21 runs from the initial two overs.

The Hamilton curator has already expressed the fact that the match against India will be a high scoring match and Ireland need to make sure that India does not bat first or else, Ireland will have to chase down another big target, given the fact that the Irish bowlers have not been able to restrict the opposition with their bowling. 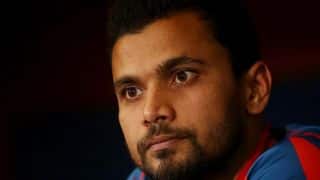