Campbell and Hope s innings is the first time in ODI history that both openers have made 150 in an innings.

West Indies openers John Campbell and Shai Hope shattered the record for the highest ever opening partnership in ODIs of all time on Sunday as they moved past Pakistan‘s Fakhar Zaman and Imam-ul-Haq‘s 304-run stand against Zimbabwe registered last year, during the first ODI against Ireland in the Tri Series opener at Dublin.

Put into bat, both Campbell and Hope dominated a hapless Ireland bowling attack with utmost ease finding the boundaries at will. The massive 365-run partnership ended in the 48th over when Campbell top edged it Ireland captain William Porterfield at mid-off to give Barry McCarthy his first wicket. Campbell, who registered his maiden ODI century in 99 balls, departed for 179, his 137-ball stay laced with 15 boundaries and six towering hits over the fence.

Here are the top five highest ODI partnerships of all time:

Campbell and Hope s innings is the first time in ODI history that both openers have made 150 in an innings. 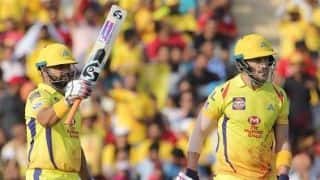