Irfan Pathan, born on October 27, 1984 is a swing magician who plays for India. On song, he can copiously move the ball and bamboozle the batsmen with his left-arm medium pace. However, injuries and poor form have affected his progress. Nishad Pai Vaidya profiles Irfan’s career. Irfan Pathan, born October 27, 1984, is a swing magician who plays for India. On song, he can copiously move the ball and bamboozle the batsmen with his left-arm medium pace. However, injuries and poor form have affected his progress. Nishad Pai Vaidya profiles Irfan’s career.

On a sunny January day at the Sydney Cricket Ground (SCG), Adam Gilchrist took guard on a belter to face a 19-year-old left-arm pacer with unknown ability. Yes, the youngster had proved his mettle on the Under-19 circuit, but was he ready for the highest level? On his Test debut a few weeks ago, he ran into an in-form Ricky Ponting as Australia amassed a huge score at Adelaide. Was it another gamble by the Indians to find a new hope for the pace bowling department? The tyro ran in, with an open chested action, delivered a peach that swung in prodigiously to york Gilchrist and shatter the stumps. The Indian team gathered around the youngster as he celebrated. They said, “Irfan Pathan is the next big thing for Indian fast-bowling.”

From the youngster who made a mark in Australia on his maiden tour in 2003-04 to someone who is now confined to one-day cricket, Irfan has seen it all in his [almost] decade-long international career. It wasn’t just his bowling, but his overall persona that captivated the public. His good looks attracted a huge female fan-following, while his modest beginnings became an inspiration for millions of youngsters. Irfan’s story is the quintessential tale of the Indian cricketer coming from a smaller centre to make a name at the highest level, but his career hasn’t panned out the way one would have hoped for when he made a mark early on.

Born on October 27, 1984, Irfan was born to Mehboob and Shamim Banu in Vadodra. Mehboob was a muezzin in a mosque in Vadodra and it wasn’t easy for his family. Irfan along with his elder half-brother Yusuf Pathan dreamt of making it big as they first picked up the bat and ball in the small by-lanes near the mosque. Gradually they started playing serious cricket at a young age and the younger Irfan made quick strides as he first played for the Baroda Under-16s in December 1997. He then played for the India Under-15s in 2000. This boy was gradually making waves. There was one instance when he wasn’t able to go for an Under-15 tournament because he did not have a passport and the authorities did not yield. 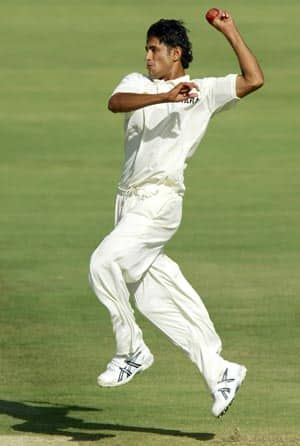 Early on in his career, Irfan Pathan had the ability to get the ball to swing prodigiously © Getty Images

However, those were small hurdles in what has been a wonderful journey. Having impressed at the age groups, bigger things were in store. Irfan made his First-Class debut for Baroda in 2001 during a game against Bengal. It was a pre-quarter final of the Ranji Trophy and he took three for 40 in his first innings. He was brought in at a crucial juncture in the tournament and was a part of the side that lifted the Ranji Trophy that season. And, in early 2002, he was headed to New Zealand for the Under-19 World Cup. The same year, he made it to the India A squad. The rise was meteoric.

Irfan was then quite a regular part of the Under-19 squad and made a name for himself with a spell of 9 for 16 against Bangladesh during a tournament in Pakistan. With a good record during the previous domestic season, the Indian selectors summoned him for the tour of Australia in 2003-04. Making his Test debut at Adelaide in the second Test, he made an early impression by dismissing Matthew Hayden. The ball shaped well and moved away from the left-hander. However, they were only chasing leather after that as Australia were dominant. Irfan was dropped for the next Test at Melbourne and returned for the decisive Sydney Test, where he announced himself with that beauty to Gilchrist.

In the Test series Down Under, India were impressive, although the one-day tri-series that followed wasn’t all that happy. Nevertheless, Irfan showed that he could deliver the early breakthroughs with the new ball. It was during the historic tour to Pakistan that followed that Irfan became a household name. In the land famous for producing great fast-bowlers, Irfan showed what he could do with his swing. He played crucial roles in victories in both the Test and One-Day International (ODI) series as India won both competitions. Irfan rose to stardom. He also won the award for the Emerging Player of the Year during the ICC Awards in 2004.

Over the next two years, Irfan firmly established himself as India’s premier strike-bowler. There were many memorable moments in that ride and he also showed the occasional form with the bat. Against Bangladesh at Dhaka in 2004, he got his first 10-wicket match haul as India steamrolled the opposition. Then his next 10-for in Tests came against Zimbabwe in 2005. It was one-day cricket where he proved to be a handful taking those early wickets. The ball would come into the right-hander from over the wicket and they were in danger of being trapped in front. The left-handers dangerously proded at those that left them.

Then there was also that Test hat-trick at Karachi in 2006. On a seaming track, he rattled the Pakistan top order with that copious movement in the very first over. Salman Butt poked at one outside the off and was taken in the slips. Younis Khan was trapped in front when the ball moved into him and Mohammad Yousuf was late at one that came in as it shattered the woodwork. Irfan went on to complete 5 for 61.

With a balanced head and a sound technique, Irfan was an under-rated batsman early in his career. Then, under the Greg Chappell regime, he was handed a promotion and given the license to go for it. Against Sri Lanka at Nagpur in 2005, he smashed 83 in the company of Sachin Tendulkar. The master guided the youngster as he fearlessly charged at the spinners and lofted them out of the ground. Later on, he kept proving his credentials as a batsman.

However, little did anyone know that his bowling was to take a hit. When India travelled to the West Indies in 2006, he was slaughtered by mainly Chris Gayle for 14 in the first over and Irfan only spiraled downwards. He also ended up losing his spot in Test cricket as a played only one of four Tests in the series that followed. To make matters worse, he was also sent home from the tour to South Africa just after he had scored a ton in as practice game. Life had come a full circle.

The stats also reflect his struggle. From January 2004 till the start of the West Indies series in 2006, Irfan’s figures were fantastic:

Thereafter, Irfan struggled to hold his own in the one-day format and was axed after the ICC World Cup 2007. His stats from the West Indies tour until his axing post the disastrous campaign reveal the drastic drop:

Although he played only 14 matches, these figures did reveal the struggle for India’s strike-bowler. The axing from the side seemed inevitable. However, he later came into the side for the ICC World T20 2007 along with his brother Yusuf.

In a tournament that saw the young brigade under Mahendra Singh Dhoni lift the tournament, Irfan was a star and resurrected his career. In the final, his spell of 3 for 16 derailed the Pakistan middle-order in the run-chase. Although Pakistan did hit back courtesy Misbah-ul-Haq, India did steal victory in a tense finale and Irfan won the Man of the Match award.

That helped Irfan return to the ODI squad for the home series against Australia and Pakistan that followed. He also made a comeback to the Test side during the Pakistan series and played the third Test at Bangalore. He did not make a mark as a bowler, but he smashed his maiden Test ton in a run-fest. Later, he was on the flight to Australia for the Test series and came into the side for the third Test at Perth. There was bad blood as the teams moved to Western Australia in the aftermath of the controversial Sydney Test. Irfan was to play a crucial part in India’s vengeance.

On the bouncy wicket at Perth, Irfan took five wickets in the match, including three crucial scalps in the second innings. Apart from that he scored 45 important runs in India’s second essay as they tried to set the hosts a target. For his all-round efforts, Irfan was awarded the man of the match. In the next Test at Adelaide, he picked up his 100th Test wicket and had to open the batting for the sake of the side. However, he only played one more Test after that series, against South Africa, but a crushing defeat in that match led to his axing.

Irfan continued to remain a part of India’s limited overs setups until the ICC World T20 2009 and was dropped after that. Although he has been in the side when they had touched new peaks under Dhoni, his personal performance wasn’t the best. Here are his stats in ODIs since his comeback in September 2007 to 2009:

It was a tough road back for him from there and injuries did not help as he missed the 2010-11 domestic season. That also ruled him out of consideration for the ICC World Cup 2011 and India wondered where it had lost its golden boy.

The next season, i.e. 2011-12 saw him make a resurgent comeback during the domestic season. As he continued to pick wickets, there was a clamour for him to be included in the Test squad for the tour to Australia. However, the selectors did not pick him for that and instead he was called up for the ODI series against West Indies in 2011. In his comeback game at Chennai, he picked up a wicket with his very first delivery.

Thereafter, Irfan has been in and out of the side. The only time he looked like cementing his spot was during the Sri Lanka series in 2012. He picked up a fifer in one of the ODIs and also had an important innings at No 7. He also featured during the ICC World T20 2012. However, injuries hampered him as he missed the domestic season in 2012-13. He returned for the ICC Champions Trophy 2013, but did not play any game. Another injury then ruled him out of the tri-series in the Caribbean that followed and he has been battling ever since.

When the Indian fan looks back at his tale, one is inspired by his beginnings. He has been a likeable character and they do hope to see him swinging the ball yet again, bamboozling the batsmen. Yet, one cannot deny the beauty of his story. In an interview with Rediff in 2004, his father Mehboob said, “In India, even the sons of billionaires play cricket, but they don’t get into the national team. What did I have? Nothing but a broom. Destiny is rewarding me.” There may be a lot more in store for the Pathan family with Yusuf also in the Indian scheme of things.