While rain interrupted the fantastic game between Australia and West Indies at the Premadasa Stadium in Colombo, the Gayle-storm that preceded it provided the fireworks the tournament needed. After a long absence from international cricket, it was good to see Chris Gayle thrilling audiences with his brilliant batting in the maroon jersey. Chris Gayle has the highest strike-rate, the best average and has scored the most number of hundreds in T20 cricket © Getty Images

While rain interrupted the fantastic game between Australia and West Indies at the Premadasa Stadium in Colombo, the Gayle-storm that preceded it provided the fireworks the tournament needed. After a long absence from international cricket, it was good to see Chris Gayle thrilling audiences with his brilliant batting in the maroon jersey. For a tournament whose start has been marred by a few one-sided games, Gayle’s brilliant knock was a shot in the arm it required.

Since the end of the 2011 World Cup, Gayle has blossomed into the most destructive batsman in T20 cricket. The ugly dispute with the West Indies Cricket Board (WICB) led him to embark on a World tour – one that saw him hone his skills in various T20 leagues around the globe. Perhaps the dispute triggered a fire within him to perform and re-establish his credentials as a fantastic player. Gayle was always considered a remarkable hitter, but his stature has certainly increased in the past 12 months or so.

T20 cricket is only a few years old and it isn’t very easy to rank players. However, Gayle’s thunderous exploits and the consistency with which he unleashes them would lead one to think otherwise. For the longer formats, the batting average is often said to be a pertinent criteria to measure greatness and consistency. The same stat isn’t a very important detail in T20 cricket as the batsmen spend much lesser time in the middle and the idea is to go for the kill almost immediately. Despite those notions, Gayle averages 44.19 in T20 cricket – which is fantastic number in One-Day Internationals (ODI) and something a good player may record in Test cricket.

It is this brilliant consistency that sets Gayle apart from the rest. There are a number of batsmen who attack the bowling and have carved a niche for themselves. However, there would be occasions where they would fall early and the average wouldn’t be as prolific. Gayle manages to maintain the same tempo day in and day out and match after match. For other batsmen, people may say that the danger is always lurking, but with Gayle is it ever so present and cannot be ignored.

Gayle has shown that a batsman can have different approaches to T20 cricket and yet finish with big scores – piled up at a fantastic strike-rate. While Brendon McCullum has revolutionised batting in T20s by adding innovative strokes to his repertoire, Gayle has given a new approach to it – one that can only be followed by players of his calibre. To approach an innings in that manner, one needs to have a strong temperament and the exceptional ability to clear the boundary.

People often expect players like Gayle to attack from the word go. However, there have been many occasions where he has taken his time to get going and been comparatively sedate. For the first few overs, he proceeds at a run-a-ball and the tees off at a great magnitude – hitting sixes at will. It is almost as if he is following the old theory – see off the first few overs and then play your shots. He makes up for the slowish start with some great belligerence and ends up with a score which makes it look as if he mauled the bowlers throughout.

Currently, Gayle is the fourth highest run-scorer in T20 cricket, but his numbers are comparatively superior. Let us have a look at the stats of the top run-scorers in T20s.

In this list, Gayle has the highest strike-rate, the best average and has scored the most number of hundreds. In fact, Gayle has scored the most number of hundreds in T20 cricket. When compared to the top three, he has played significantly fewer matches yet is close to them on the run tally. David Hussey has played 189 matches and has 4670 runs to his name. Gayle has played 79 matches lesser than Hussey and is only 560 runs behind him – a tally he can easily overhaul in a season at the Indian Premier League (IPL).

Gayle has kicked off his ICC World T20 2012 campaign with a brilliant knock of 54 against a good Australian attack. Going by the way he was smashing the ball, he has maintained that belligerent streak and is seeing the ball like a football in the middle. If West Indies are earmarked as one of the favourites, it is because they have a weapon called Gayle – whose fury can decimate and demoralise any attack going around. The Caribbean people would hope their trump card maintains this streak as their hopes vastly depend on him. 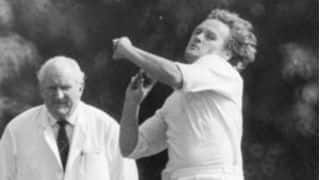 Rodney Hogg kicks stumps in a fit of rage