Karthik has struggled to find a regular place in the Indian setup.

Once again Dinesh Karthik is back in the thick of things, as he has been selected for the Asia Cup 2014. However, just like before, he may still find himself in the midst of not being able to get a longer rope in the side. Abhijit Banare writes on Karthik’s comeback trail and what it means for him.

It’s interesting to recount some old memories and see it being repeated all over again. Back in 2004, the then India ‘A’ coach Sandeep Patil had recommended Dinesh Karthik ahead of MS Dhoni for the Indian team despite the latter’s impressive performances. In 2014, Karthik once again finds an opportunity to cement a place in the side during the upcoming Asia Cup 2014, only because Dhoni is injured. In fact, it’s tough to make a comeback into the Indian team, where every opportunity is dissected and minutely scrutinised.

To recap 2013, Karthik had those two exceptional stroke-filled tons in the warm-up matches of the Champions Trophy against Sri Lanka and Australia. The main draw too didn’t go that bad for him, as he made an impressive half-century against the West Indies. Above all, he showcased that he was a specialist batsman and not just a wicketkeeper. In Karthik, India can look at someone who brings solidarity to the middle-order. Now, he isn’t exactly one of those batsmen who with a bulky willow smashes the bowlers all around the park. However, he has that uncanny ability to play ground-strokes and rotate the strike by piercing gaps with ease. Having batted in different positions, Karthik’s flexibility makes him an ideal batsman to be promoted up the order, if necessary in a run chase as well. And finally, he can soak the pressure and play well which in turn, adds to his value.

The challenge though for Karthik is a tricky one. He secures an opportunity at a time when the Indian middle-order is not as solid as it was thought out to be a few months ago. Barring Virat Kohli, there’s not much certainty in the middle-order. Ajinkya Rahane is still finding his feet, Cheteshwar Pujara gets his chance to prove a point and above all, a regular face has finally been dropped — Suresh Raina. With Yuvraj Singh’s comeback too not predicted anywhere in the near future, Karthik has the perfect platform to put up his case a specialist batsman. And he is very well capable of occupying the spot, as discussed above.

The challenge though for Karthik is a tricky one. He secures an opportunity at a time when the Indian middle-order is not as solid as it was thought to be a few months ago. Barring Virat Kohli, there’s not much certainty in the line-up

Karthik has his task cut out. He is in form, the confidence is sky high and he will be playing on wickets that likely won’t trouble him. The only thing that could affect him is the pressure of delivering the goods, when there is a chance that he may not get a long rope in the side. While Karthik may not be able to secure the wicketkeeper-batsman role till Dhoni is playing. Yet, Dhoni’s absence means that he is certain to be in the playing XI, at least for the Asia Cup. If he does well in Bangladesh, it could do a lot to help him make a point with the ICC World Cup 2015 just one year away. With a fair amount of experience behind him, the selectors wouldn’t hesitate in taking him into consideration for their World Cup plans. 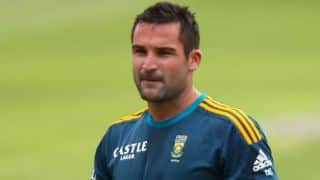