BCCI's fierce opposition to the utilisation of this technology could melt.

MS Dhoni is no more playing Test cricket. Sachin Tendulkar has retired. There have been sweeping changes in the Board of Control for Cricket in India (BCCI) as well, with N Srinivasan and party being booted out of cricket administration. These were the men who never liked DRS. With them going away from handling cricketing matters in India, there are few things for India to revisit, and see if they have anything good in offer. READ: BCCI’s stance on DRS still same but open to talks, says Jagmohan Dalmiya

The technical shortcomings and cost of having DRS in place was one of the reasons behind India not opting for the technology, while other countries like England, South Africa and Australia have been using it on a regular basis. BCCI’s has a two-point objection: their lack of trust on the ball-tracking technology, and the very fact that a batsman or a fielder challenging an umpire’s decision — which they think is against the spirit of cricket.

For once, let us concede that BCCI is right. As per the last comments on the technology, it seems they are not completely against the DRS; they simply want it to be tweaked to level of their satisfaction. The ball tracking technology has to be foolproof and if those who handle this are able to make the necessary changes, DRS will be clear of all doubts. READ: Virat Kohli to discuss DRS with Indian cricketers

BCCI’s idea of using the third umpire in dodgy situations would certainly bring in more accuracy in the game. The third umpire, who generally comes into action when he is referred to, will be utilised efficiently. Rather than helping out in matters only when communicated, cricket will witness  revolutionary change with the third umpire keeping sharp eye on the proceedings, and addressing howlers as well as small misses that occur on field.

The idea of maintaining ‘spirit of the game’ by taking it away from the men on the field to the one sitting in the pavilion, powered with all latest technologies sounds nice, especially for those crying over the ‘lost days of cricket’ (hang on, since when have BCCI actually cared for the ‘spirit’ of cricket?). READ: Should there be room for human errors by umpires?

However, ignoring DRS it can rob fielding teams of wickets they get through faint nicks and edges which both — umpires and fielders — at times fail to hear due to the noise produced by fans (as well as leading batsmen to fall prey to wrong decisions).

India say they are ready to accept the modified DRS, and it would certainly be welcomed all over the world. India had earlier used its power of voting against the mandatory rule of DRS in bilateral series. As of now, DRS is used in a bilateral series only when both teams agree. This situation gives rooms to arguments — such as the famous on-air tiff between Ravi Shastri and England’s Nasser Hussain.

Kohli’s idea of talking to the team members about DRS is certainly a positive move by the skipper in the right direction. Time and again India have suffered, ironically more overseas, due to poor umpiring. The standards have surely gone down in umpiring a bit and there is no harm in embracing the technology which can help to get things right. 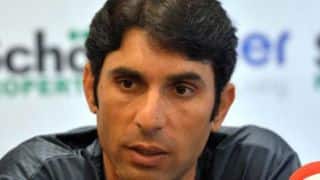