Is Mahendra Singh Dhoni really the master finisher the media makes him out to be?

Is Mahendra Singh Dhoni really the master finisher the media makes him out to be?

The latest cricket hype has been about the perceived finishing abilities of Dhoni. The print and visual media has gone to town over it. Let’s take stock of the games since 2011 when India chased a target in One-Day Internationals in which Dhoni had played. 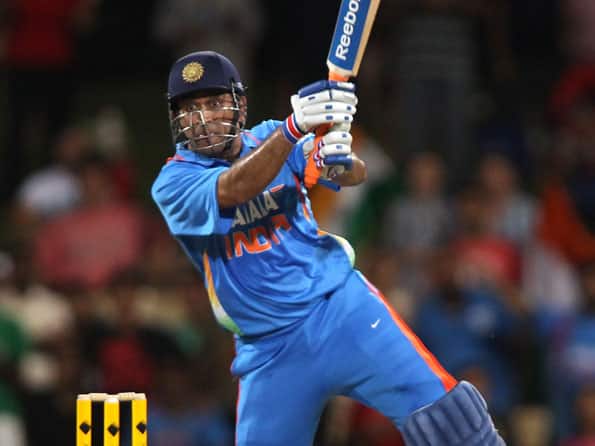 Does perception rule over reality? Indeed! Especially if the media drums up hysteria devoid of facts. The latest cricket hype has been about the perceived finishing abilities of Mahendra Singh Dhoni. The print and visual media has gone to town, thanks to one stroke that sailed over the boundary to get a win for India over Australia, and another final scoring shot for three runs that staved off a defeat against Sri Lanka, handing India a tied game.

Is Dhoni really the master finisher he is being made out to be?

Let’s take stock of the games since 2011 when India chased a target in One-Day Internationals in which Dhoni had played. India have been involved in 15 games where they had to chase a target. They have won 10 games, lost four and tied one.

How has Dhoni fared in these games? Aside from the last two games in the current Commonwealth Series, Dhoni has made a contribution in just two other games – the World Cup final where he scored an unbeaten 91, a game where Gambhir guided the run-chase with 97, and the match against England at Mohali where he made an unbeaten 35 off 31 balls, a match where Rahane with 91 and Gambhir with 58 had laid the foundation.

In four games against South Africa in 2011, Dhoni had scores of 25, 5, two and five. In the World Cup, his contributions in chases were 30, 19, 7 and 91 not out. The series against England had scores of 35 not out and 15.  The current series saw 29 being made in a lost cause against Australia and four runs against Sri Lanka, a game where Ravichandra Ashwin and Ravindra Jadeja guided India to a win after Dhoni’s failure. Aside from the World Cup final, his only knock of substance is a mere 30 off 50 deliveries in the World Cup match against Ireland at Bangalore! His complete failure in South Africa aside, Dhoni made just seven runs in a crucial semi-final game against Australia in the World Cup quarter-final.

And in these 15 games, bigger contributors have come from other players. Gambhir has scores of 50, 97, 84 not out, 58, 92, and 91 where aside from one tie, the other five games were won.  Virat Kohli starred with the bat in four games with scores of 54, 87 not out, 112 and 86 not out where the only loss was against South Africa. Yuvraj features with three half centuries when chasing targets in three World Cup wins! Contributions significantly larger than the man now being hailed as a greatest ever finisher!

There is no doubting Dhoni’s intelligence in the shorter formats of the game or his ability to pull out the big shots. Should the likes of Kohli or Rohit Sharma learn to put a price on their wicket like Dhoni does, they would have far better performances to show against their names. The fact of the matter is that Dhoni has won very few games in chases in recent times and there are other batsmen who have fared far better.

Victories or even avoiding a defeat with a tie pushes some events under the carpet, that otherwise would have been debated. The timing of using the batting power play in the last game against Sri Lanka when Dhoni and Raina were new at the crease with a long way to go in the game never got a mention. Would the last Laisth Malinga delivery that an off balance Dhoni swung for three runs been a wide had Dhoni not swatted it?

It’s more about the media than Dhoni

This analysis is not a reflection about Dhoni, but is more a comment on the media and how baseless and ridiculous is the Dhoni trumpet that they are blowing sky high. This euphoria could quite be the making of interested quarters to further a brand that they have invested in. If not necessarily show the others who have performed in winning causes in poor light, it certainly does not give credit to those who deserve it whilst heaping undeserved praise on an inconsistent and average performer in run-chases.

Summary of the last 15 games since 2011 when India chased a target in One-Day Internationals:

India were chasing 290 to win. Dhoni came in at 43 for four and was out for 25 off 35 balls with the score at 95 for five. In a match that was lost, the most significant contribution was from Kohli (54 off 70 deliveries).  A batting failure for Dhoni.

India were chasing 221 for a win.  Dhoni came in at 61 for three, and was dismissed for five off 12 deliveries, leaving India at 69 for four. India won the game. Yusuf Pathan hauled India out from 93 for five with an innings of 59 off 50 balls. India’s finisher for this game was Yusuf, supported by Suresh Raina with 37 off 47 balls.

India were chasing 191 from 32.5 overs under Duckworth-Lewis method to win. Dhoni came in at 112 for four and was out for two off eight deliveries, leaving India at 123 for five. Match lost. Kohli remained not out on 87 off 92 balls.

India were chasing 189 for win. Dhoni came in at 139 for five and kept company with Yuvraj who made an unbeaten 51 off 73 deliveries. Dhoni’s scored an unbeaten off 40 deliveries. India won the game.

India chased 260 in a critical quarter final game. Dhoni came in with India at 168 for four and scored seven off eight balls. When he was out, India were 187 for five. Yuvraj 57 not out of 65 balls saw India home. Other key contributions came from Sachin Tendulkar  (53 off 68 balls) and Gambhir (50 off 64 balls).

India chases 275 for a win.  Dhoni promoted himself ahead of Yuvraj, He came in at 114 for three to take India to a win with 91 not out of 79 balls. Other key contributor: Gambhir with 97 off 122 balls at the top of the order.

India’s target is 234. Dhoni came in at 157 for four and is out for four off five deliveries leaving India at 167 for five. India achieve target with Ashwin making 30 off 38 balls and Jadeja 24 off 28 balls, both unbeaten.

India chase 270 for a win, Dhoni came in at 178 for four and saw India through with an unbeaten 44 off 58 deliveries, a six sealing the win in the last over. Key contributions also came from Gambhir – 92 off 111 deliveries.

Rohit Sharma has been India's most successful batsman since World Cup