At one point, Shahid Afridi himself could not tell you if he was a batsman or a bowler, so blurred has been the line between his contribution to the team.

As Shahid Afridi announced his retirement for the umpteenth time, tributes had begun flowing in. As with all retiring cricketers, great words are thrown in without much care — Legend, Hero, Genius — these are all the words used to describe the man.

But was he really a genius? Vague as the term sounds, does the erratic, ECG-like career of Shahid Afridi warrant the term ‘legend’?

Shahid Afridi’s biggest trick has been his adaptability. At one point, he himself could not tell you if he was a batsman or a bowler, so blurred has been the line between his contribution to the team. But it was undoubtedly his batting that shot him to international stardom.

Against the world champion Sri Lankan side of 1996, Shahid Afridi had been promoted up the order and borrowed Waqar Younis’ bat to smash the fastest century in cricket, a record that survived for 18 years. In hindsight, only in the 1990s could such an event occur. It was only in the 1990s that bowlers were encouraged to have a slog at first-down, unthinkable at this time and age.

But it was destined, and Afridi the Superstar was born. He would then go on to squeeze a 20-year career on the basis of this one innings.

As batsman, Shahid Afridi would not qualify even as adequate, leave aside ‘legendary’. If we were to refer to the sticky world of statistics, Afridi stands no chance. A Test batting average of 36 is hardly the stuff legends are made of. And in ODIs, where he played 398 matches (the 5th highest of all time), he was able to scrounge up an embarrassing average of 23.57, probably the lowest for any batsman for whom the word ‘legend’ was used.

And yet, one cannot go only by statistics, for if that were the case, Mominul Haque has a better Test career average than Tendulkar. So how does one understand his impact, beyond statistics?

One aspect of Afridi’s game was unmistakable. He had a special liking for Indians, both with bat and ball. But keeping this bit of statistic aside, Afridi has not been single-handedly responsible for his team winning any tournament. He has played very well in a few finals, and been instrumental in others. But a few instances here and there in a career spanning 20 years hardly count as legendary. ‘Dependable’, ‘adaptable’, and ‘innovative’ were never words that had the fortune of being used for Lala. What he was, was Boom Boom!

A mad maverick who could take a ball from outside off and deposit it in the Indian Ocean. But even the most inexperienced bowler in the side had a chance to get him out the next ball. That was the hallmark of Afridi’s batting — the power of a horse encrusting the brain of a rabbit.

Afridi is the only cricketer who, after 20 years, bats in the same mindless fashion that he did when he debuted. In a recent interview, he revealed how coaches had tried to change his game, but he stuck on resolutely with his style (if one could call it that). Romantic as the idea of ‘playing one’s natural game’ sounds, charging down the pitch as the last recognised batsman of the side does not depict flair. It depicts mindlessness.

Moving on to his bowling, which was always Afridi’s key skill.

He started off as a leg-spinner, and to his credit, adapted as a bowler way more than as a batsman. From leg-spinners that turned a bit, Afridi mastered a number of variations — the googly, the faster one, the drifter, and the top-spinner.

He strung together 48 wickets off 27 matches in Tests, and 395 wickets from 398 matches at an average of 34.51. While the number of wickets might seem huge, Wasim Akram (who elicits the word ‘legend’ with no hesitation), bagged 502 wickets in 356 matches at an average of 23.52. In nearly 400 matches, Afridi has picked up 5 wickets in an innings merely 9 times, hardly the sign of a dominant bowler.

But of course, this is purely looking at his bowling through the prism of statistics. But if we take the prism away and look at his impact, he was not the most lethal bowler of his team at any point. Part of that is because Pakistan has always had superstar fast-bowlers, but mostly because he was not all that dangerous as a bowler.

His pace as spinner helped him cement his place in the T20 side, and the quick, pointed overs he shot out benefited him in the shortest format of the game, but that was it. Afridi was no magician with the ball. Neither was he gifted like Shane Warne, nor hard-working as Anil Kumble.

As fielder, Afridi was shaky at best. On his days he could pull off stunning catches. But on most occasions, he was your average Pakistani fielder. One who would drop lollies and sitters, the only prominent international cricketing side that still fields like stoned schoolboys.

A legend sticks with his team through thick and thin. Shivnarine Chanderpaul, for example, could be called a legend, for sticking to a team that was going through its worst slump in history. Afridi conveniently ‘retired’ when it suited him. Sometimes, it seemed like threat to the board, other times, like the whims of an opium-smoker. Afridi, in all probability, holds the uncanny record for announcing his retirement the most number of times.

But let’s keep mundane statistics aside. What does a legend do? How does one graduate from a good player, to a great player, to a legend?

If you ask me, it is through one’s behaviour both on and off the field. A legend is someone the whole team revolves around, one who inspires trust and confidence. If anything, Afridi has only induced heart-attacks and seizures among his fans. There was a hint of unpredictability to his batting, but that is the polar opposite of a legendary player. If anything, legendary players are boringly predictable in their ingeniousness. At best, Shahid Afridi was a show-horse. You could bet on him and strike gold on a good day. But on most days, you’d have to bite the dust and rue your choice.

Another aspect of greatness is how you fare against the best. Here again, there is a Mohammad Irfan-sized hole in the statistics. While his heroics against India undoubtedly elevated him to superstardom, if one were to analyse his career against the strongest cricketing side of the era — Australia — his record is ordinary at best. With bat he averages 17-odd in both Tests and ODIs. With ball, he averages 32.44 in ODIs and an appalling 47.50 in Tests.

Looking at his behaviour on field, Afridi hardly had a career that you would call blemish-less. He has been involved in scuffles with his captain and coach. Players have revealed they had fistfights with him in the dressing-room. He was once caught biting the ball (again, only in Pakistan!) in the middle of a match as the captain. He was caught scuffing the pitch by pirouetting on it at lunch break, embarrassingly told by the English opponents that he had been caught on camera.

Afridi often makes statements like ‘Allah has given us a big heart, which he hasn’t given Hindus’. Or take his recent statement where he called out to Muslims and Kashmiris to come out and support them. If anything, Afridi spoke with the diligence of a 7th-standard water boy, not a legendary sportsman. He invoked neither the fear nor respect from the opposition the way Wasim Akram, Saeed Anwar and Inzamam-ul-Haq did.

His record as a captain is shaky and bizarre. His decision-making in most tournaments (like the ongoing World T20) has been startlingly abysmal, even embarrassing. For how can you get inspired by your captain, when he himself seems to possess the attention span of a woodpecker?

The fact is, Afridi managed to survive 20 years at the top through some innovation, and by pushing through on the basis of his fitness, perseverance, and by pulling out of formats and tournaments that did not suit him. He retired from Tests in 2006 (probably the first of many times). He made a return in 2010 as the captain, without having played a single Test for four years; again, Pakistan!), only to announce his retirement again.

The fact is, if he was a part of any other team, he would not have survived even ten years of international cricket. Can you imagine someone like him in an Australian team? He would probably have been driving a tractor in the fields of Western Australia. Had he been born in India, he would probably have been hosting cricket shows on channels nobody watches. Only in a team like Pakistan could a player like Afridi survive 20 years of international cricket.

Perhaps cricket will never see a player like him again. Perhaps I will never know what it means to root for him in a match. I am told that he brings in a certain X-factor to the sport. He brings unpredictability to a sport that proudly wears its colonial roots, mouthing off records, statistics and averages like they were the mutterings of an exorcising priest.

Shahid Afridi was the biggest crowd-puller for 20 years, in a team bejewelled with a number of individual stars. But the truth remains that Shahid Afridi was never the best batsman, bowler, fielder, or thinker of his side.

If anything, Shahid Afridi was a showman, opting out of formats that could embarrass him, and adapting to those that best suited his playing style. He was unique and unpredictable.

But to call him a legend, I am afraid, is an insult to the word ‘legend’. It is an insult to players who worked that changed, adapted and moulded their styles who persevered through difficult times by grit, application and doggedness.

Sadly, those are qualities Shahid Afridi never possessed. Nor did he seem interested in possessing. 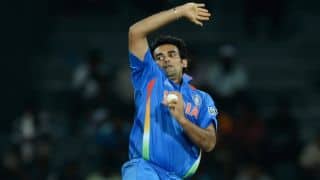