Is Virat Kohli a cheat? Bangladesh umpire Sharfuddoula seems to think so!

Is Virat Kohli a cheat? Bangladesh umpire Sharfuddoula seems to think so!

Virat Kohli was not impressed after he was denied the catch.

Virat Kohli claimed what he was convinced was the clean catch of Tamim Iqbal in the second One-Day International (ODI) between India and Bangladesh. However, umpire Sharfuddoula did not accept Kohli’s word and took it to the third umpire. Shiamak Unwalla feels that in doing so, Sharfuddoula questioned Kohli’s integrity. SCORECARD: India vs Bangladesh 2015, 2nd ODI at Dhaka

India’s tour of Bangladesh might not end well, regardless of the final result. Tensions have been brimming ever since the ICC Cricket World Cup 2015 quarter-final between the two. After Bangladesh won the first ODI, they engaged in vociferous celebration that might not be regarded particularly tasteful. Added to that was the incident between Mustafizur Rahman and MS Dhoni. READ: Was MS Dhoni right in pushing Mustafizur Rahman aside?

And yet, the true boiling point could be what happened eight balls into Bangladesh’s chase during the 2nd ODI. Dhawal Kulkarni gave Tamim Iqbal just a bit of width, and the opener responded by throwing his bat at it. The ball ballooned to Virat Kohli, fielding at mid off. Kohli ran forward and accepted the catch even as the ball was dying on him. READ: MS Dhoni, Ravindra Jadeja’s forms have direct impact on India’s fortunes

His celebration was instant. Soon the rest of the Indian side had gone up in glee as well. This was precisely the start they wanted, defending a low score. However, on-field umpire Sharfuddoula was not convinced, and went up to the third umpire, as was his right to do so. There was sufficient doubt in the third umpire’s mind despite the replays suggesting the catch was indeed clean. Tamim was declared not out. ALSO READ: ICC Cricket World Cup 2015: Top five controversies

Whether or not it truly was out is highly debatable. But by deciding not to listen to Kohli — who was positive that the catch was taken cleanly — the umpire called into question his credibility and integrity. It was not like Kohli was unconvinced or not confident about the catch. On the contrary, his celebration was instant. The umpire, rather than trusting the word of a player who has never been accused of playing unfairly, chose not to listen to him. ALSO READ: Mustafa Kamal not a man with clean slate to instigate change

This is an important distinction. Had the player in question been someone who has a tendency to appeal falsely (think of someone whose name rhymes with Crad Maddin), the umpire would have been absolutely right. But given that this was India’s Test captain — and more importantly, a man who plays hard but has never been accused of dirty tactics — and given that he was convinced it was a clean catch, the direct message given by the umpire is that Kohli cannot be trusted.

Kohli’s reaction was obvious. He went up to the umpire to clarify that he was sure the catch was clean. The umpire did not relent. Kohli walked away, shaking his head in disbelief. He was probably insulted as well, as well he should be.

It is an event that will doubtless cause something of a stir. Exactly what will happen after the match remains to be seen, but if anyone doubted whether India would take this series seriously before, this incident will clear things up. India tour of Bangladesh, 2015: Complete coverage 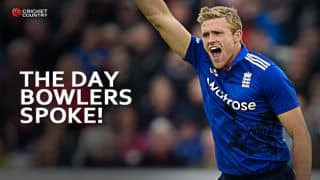 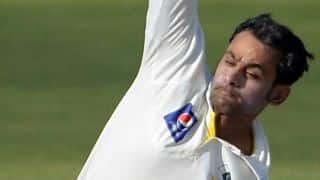